The Reason We Weren’t Ready For the Pandemic

During May 1997, a group of physicians were shocked by the virus that killed a 3-year old from Hong Kong. Called H5N1, the infection had taken the leap from animals to people. Like Ebola and SARs, mad-cow disease, bird flu, swine flu, and Zika, the outbreak was controlled and our alarm disappeared.

But infectious disease experts remained concerned. In 2018, a group from the World Health Organization topped their 2018 worry list with an incurable “Disease X” virus that would start in animals and jump to humans.

In the past, nations ordered vaccines that they never needed. France tried to cancel a 2010 delivery of 94 million swine flu doses. Almost at the same time, a public health official was condemned by politicians at an EU parliamentary meeting for creating “unjustified fear.”

The U.S. also tended to minimize the likelihood of a viral pandemic. After funding and institutional mandates were established, many were “repurposed.” Between 2004 and 2005, President George Bush initiated pandemic preparedness funding and a detailed response list for U.S. agencies. But coronavirus research soon decreased. More recently, the Trump administration eliminated a pandemic preparedness unit from the National Security Council. Instead, virus planning had to compete for priority in other agencies.

You can see below that coronavirus funding was cut considerably until 2020: 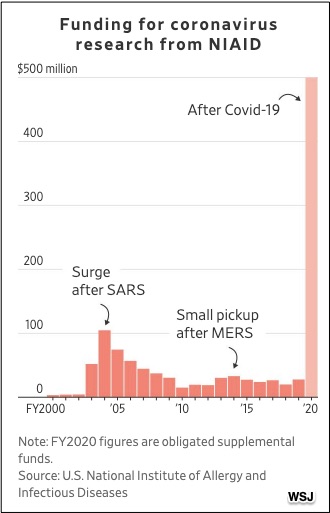 Sometimes, I like to use an opportunity cost chart to show why a seemingly illogical decision made sense. It reminds us that looking back, we didn’t know the consequences of the choices we made. We only knew the tradeoffs:

Returning to our title, we could say that tradeoffs were a reason that “Disease X” became A COVID-19 outbreak for which we were unprepared.

My sources and more: For today, my one source was this WSJ article. Our featured image is a stained glass image that was commissioned by an infectious disease expert.