We could say, “Just add weights to skinny pigeons and they’ll stage a coo.”

Instead, for humans, it’s height.

A fat male pigeon sits at the top of pigeon society.

In a recent study,  U.K. and Australian scientists observed that heftier homing pigeons got the females and the food. Meanwhile, their diminutive brothers had to accept less. Because male dominance seemed to be based on size, scientists wanted to see what would happen if the little pigeons thought they were bigger.

Once they became 12 percent heavier because of weights stuck to their backs, the little guys acted like the big ones. (The birds were already familiar with the feeling of something on their backs.) Their aggression–“pecking, chasing, beak grab, neck pull and wing slap”–went up significantly.

17 birds were observed for 7 sessions (the 1-7 in the graphs) that took place during 31 months. Below you can see the correlation between group rank (lower y-axis numbers equal higher rank) and body mass. Then, when the bottom 50 percent (in green) were weighted (I added the arrows), the males but not the females became more aggressive. After, when the weights were removed, the aggressive behavior disappeared and the hierarchy returned to where it had been: 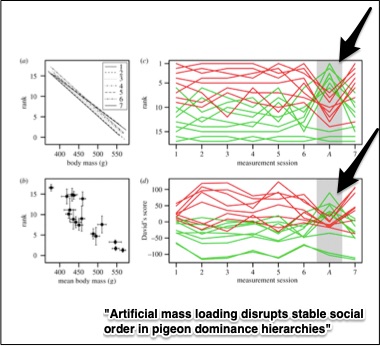 Sort of like pigeon mass, tall people could be advantaged simply because of their height.

Looking at leadership, performance and salary, researchers have found that taller people achieve more career success. A 2015 Atlantic article tells us that an extra inch will get us an extra $800 a year. Extra inches are also also more likely to get us a promotion, and yes, become a U.S. president.

But we still are not sure why. Some have hypothesized that the esteem a taller individual develops as a teen affects future success. Others, connecting height and health, suggest taller people deserve the status because they have more cognitive abilIty. And a third group thought that we might even have an evolution related bias that equates physical prowess with power.

Whatever the cause, we know that being tall is just one more ingredient in a success formula.

Just like a factory owner increases physical capital with more equipment, we build our human capital by accumulating education, informal knowhow, and the psychological equipment. These cognitive and non-cognitive attributes let us optimize our potential. As a constraint or a springboard, height can affect our human capital…

…and maybe bird capital too.

It was fun to go through all of the presidents, from Lincoln, the tallest to Madison, on the short side:

My sources and more: Sometimes, like the pigeon study, an NPR story grabs your attention. Much drier but loaded with detail, the paper is here. Please note that my quotes and image came from the Australian Science Media Centre. As for humans, there are many possibilities but few are very recent except for this paper on the connection between height and socioeconomic outcomes. However, if you just want a good read about height, then go to The Atlantic and the New Yorker,  Finally, if you really want all the facts, I recommend this book from Nobel prize winning economist Robert Fogel.

Please note that most of my Human Height paragraphs and some of my Bottom Line were in a previous econlife post.

What a Behavioral Economist Says About Exercise