On August 24th, Apple stock will split 4 for 1. That just means you get 3 additional shares for every 1 that you hold. While the number of shares go up, the price goes down (and more people can afford them). If Apple is trading at $400 or so, then the split-adjusted share price will be $100 when trading starts on August 31.

Below, you can see Apple’s stock-split history: 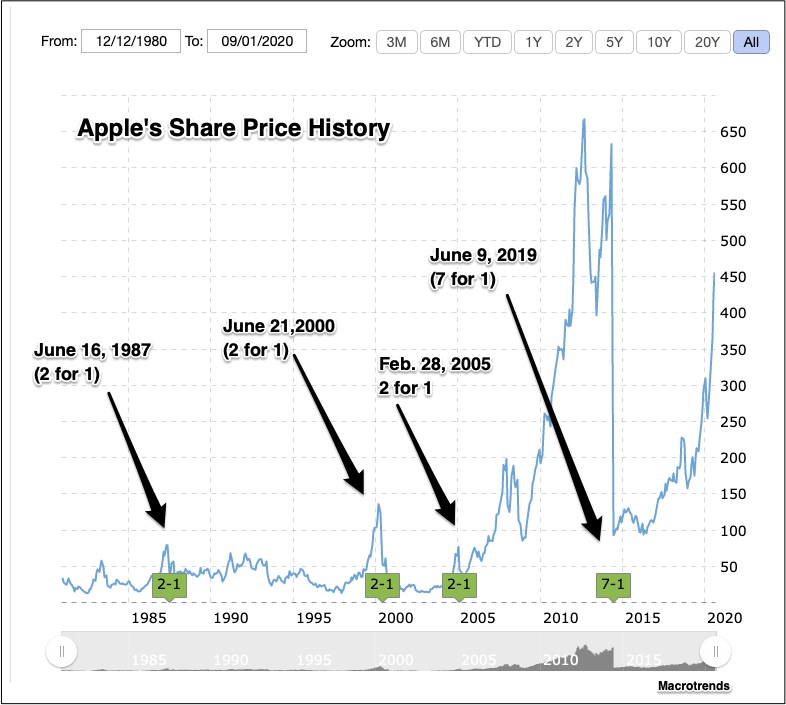 Where are we going? To why Apple became a corporation.

Our story starts in Sunnyvale, California during the 1960s. As a rather small municipality with a disproportionately large population of engineers and electronics experts, Sunnyvale was Steve Jobs’s and Steve Wozniak’s hometown.

In high school, together, the two friends shared an interest in electronics. After, they attended college for awhile, worked, and traveled. As designers at Atari, they created video games. Then, in 1976, they started their own computer company that could have been named “Executek” or “Matrix Electronics.”

At this moment, an image of your laptop computer might come to mind. A monitor, a keyboard, maybe a printer nearby. In 1976, none of this existed. When Jobs and Wozniak promised 50 computers to a computer store, the owner received 50 circuitry boards—no cover even hid the network of wires and chips that made up the computer. That was it—no power source, no disks, no slots.

To begin, Jobs and Wozniak used their savings and borrowed funds. For their very first order, they sought to build each circuit board in the Jobs family garage for $25 and to sell them for $50 apiece. When they sold their earliest “fully assembled” Apple I computers in 1976, the price was $666.66, a number that appealed to them much more for its sound than for practical pricing reasons.

However, they needed much more money.

Because they created a corporation, they could leap from a small revenue stream to a venture capital, privately financed corporation, to a public one. The turning point was December 12, 1980, when, at $22 apiece, its shares were first sold to you and me. That large infusion of cash made additional facilities and product development possible. It illustrated the money raising power of the corporate form of ownership.

Our Bottom Line: The Corporation

How you own your business determines your legal obligations, your liabilities, and your potential profitability. Because a corporation exists as a “person” in the eyes of the law, investors have limited liability. Meanwhile, when it issues new shares or borrows through bonds and loans, as a separate entity, the corporation can raise money.

In a market system, the corporate form of ownership optimizes what the invisible hand can do…with an Apple.

My sources and more: While their emphasis is more politics than business, The Washington Post had some good analysis on the Apple stock split. From there, some nice complements were Barrons, WSJ, and BusinessInsider. From my Addison Wesley textbook, I’ve excerpted some apple history.