Two educator groups published an estimate of what it could cost to open a school district safely.

The numbers are big.

Opening Schools Safely: How Much?

Assume that your school district is average. It has 3,659 students that use 183 classrooms. There are 329 staff members who work in eight buildings. Forty school buses, one quarter filled, would transport students.

Below, you can see the specific estimates: 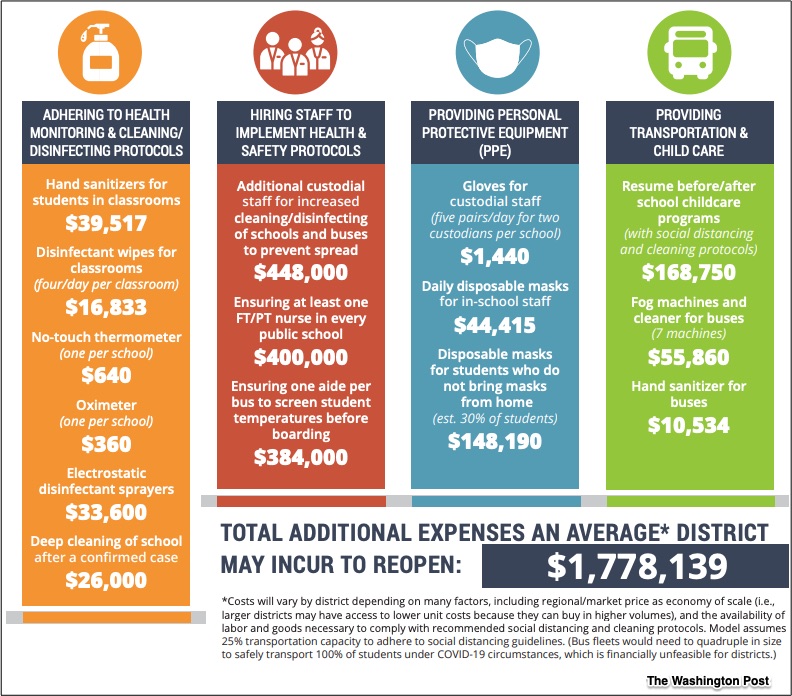 At $13.5 billion, the CARES ACT allocation was a tiny proportion of what is actually needed for K-12 schools. In a letter sent to the Senate, the educator groups said their total was somewhere between $158.1 billion and $244.6 billion. The letter also noted that instructional assistance to compensate for last year’s remote learning deficits could require another $173 billion.

After several years of a robust economy that buoyed state finances, now they are heading in the other direction. Some, like Georgia, Colorado, Oklahoma, and Idaho are cutting their education budgets. Many have fiscal problems that relate to Medicaid, sinking tax revenue, and unfunded pension obligations.

A list of the states with the most dismal finances is topped my own state, New Jersey, and then Illinois, Massachusetts, and Hawaii. I’ve copied the 10 states whose revenue and expenses compare most unfavorably. As you can see, orange indicates a shortfall (expenses exceeded revenue) while blue, shows the surplus (revenue exceeded expenses):

The 10 states with the healthiest finances were led by Alaska, Wyoming, and South Dakota:

Returning to where we began, you can see why the cost of opening schools safely could be more than a municipality could afford.

My sources and more: The Washington Post’s cost estimates for safe schools started me thinking about a state’s fiscal health. From there, the possibilities included a Pew article on state borrowing, a Pew report on state fiscal health, and the letter that a Senate Committee on Health, Education, Labor, and Pensions received on school cost.

Where Lost Luggage Finds a Home