For the first time since 1945, what should have been yesterday’s Kentucky Derby, was postponed.

The local mint grower is concerned.

Now, mint acreage will have to be cut, mown over, fertilized, and regrown. It should be ready for the new September date.

You can imagine what is going through the local hat maker’s mind. Reds, yellow, and flowers are perfect for a May extravaganza. But what makes sense for September?  Browns and muted oranges?

According to USA Today, these hats were among the best at the 2019 Kentucky Derby: 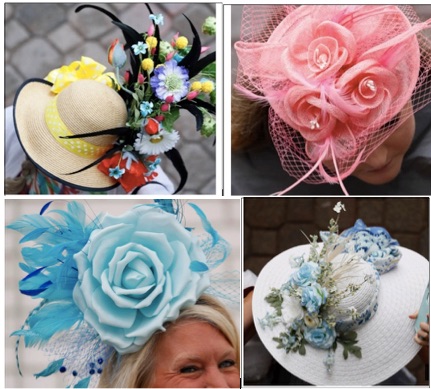 Meanwhile, a local cigar maker with eight parties that were scheduled says that he generates 25 percent of his income from the Derby. Similarly, Heaven Hills Brands had to cancel its distillery tours.

Ranging from hotel rooms to buffalo wings to dry cleaning, businesses benefit from major sporting events. Sports economists say though that it all depends. Sometimes, the retail activity from a Super Bowl or a World Series just replaces much of what would have occurred anyhow. In addition, the hotels and larger establishments typically send revenue to destinations far from the sports event. As a result, the extra business from a major event is less than the promoters expect.

At the 145th Kentucky Derby in 2019, your spending could have ranged from $60 for a seat to $10,000 a night for a room at the Omni Louisville Hotel. Other spending included:

It is probable, though, that the $300 million or so that the Kentucky Derby’s organizers say they bring could be a real economic plus. I have heard (anecdotally) that Louisville would be rather quiet in May if the Derby were not scheduled.

So, returning to where we began, we can assume that two tons of mint would certainly not have been planted if people didn’t want 127,000 Mint Juleps.

My sources and more: Thank to Marketplace.org for alerting me to the Derby mint crop. From there, there were more possibilities than I expected. I found The Washington Post had more details as did the Kentucky Derby and the NY Times. But if you just want to see more hats, do go to USA Today.

Our Weekly Economic News Roundup: From Beer to Facebook

How Productive Are We at Home?