Where to Find Gender Inequality

It has been 25 years since 189 countries committed themselves to gender equity. At the 1995 Beijing Women’s Conference, a 150-page road map outlined the path. In New York, now, the U.N.’s Commission on the Status of Women reaffirmed the plan.

Based on a new UN report, we are far from our destination.

A 2020 UN Report on gender inequality and social norms explored attitudes about politics, education, economics, and physical integrity. They wanted to know if people thought that men made better political leaders. They asked if men deserved jobs more than women.

The survey’s participants had these choices: 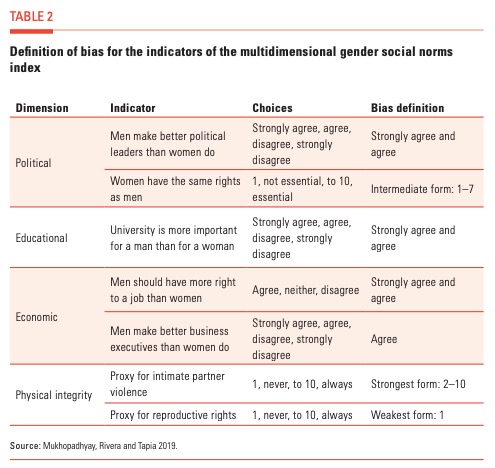 The report concluded that gender bias is almost everywhere. Not one country has gender equality: 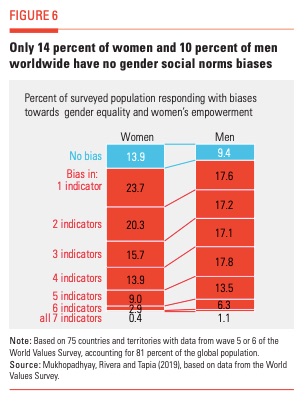 In politics, for example, almost 50 percent of the world’s population believes men are better as national leaders. Correspondingly, there currently are just 10 female heads of state among 193 nations. For economics, close to 40 percent said that men are better in business. And yes, only five percent of the S&P 500 companies have female CEOs. As for physical integrity, a horrifying 28 percent say it’s okay for a man to beat his wife.

The Reasons for the Results

Women have attained basic empowerment. We have more education and we serve at lower levels of government in greater numbers. However, as power becomes more concentrated and elevated, the women disappear: 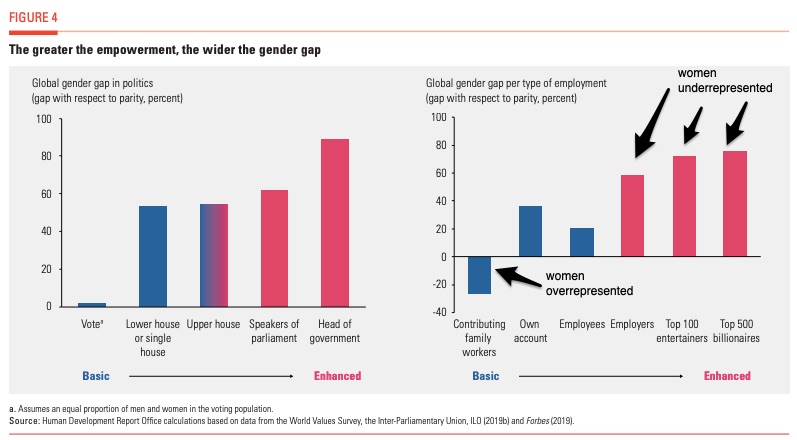 Stubborn social norms could be one reason that women have difficulty moving through “an invisible barrier.” At the bottom, in many countries, the legal hurdles that constrain women have been removed. Women can get more education, vote, hold political office, and participate in the economy. But once we get past the basics, the march upward gets increasingly constrained.

During the decades before the 1990s, a woman’s horizon and her identity changed. Her horizon involved whether she perceived work force participation as a part of her longterm future. A woman’s identity connected to whether her career defined who she was.

After though, progress plateaued. 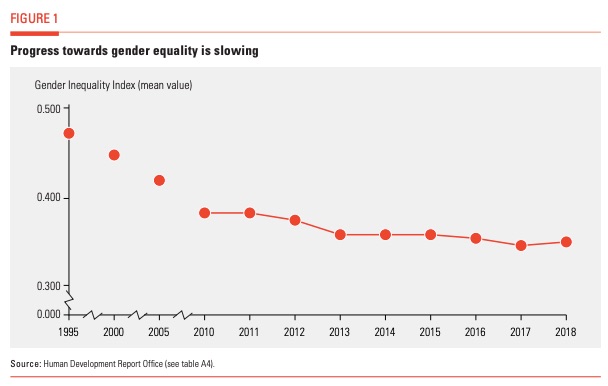 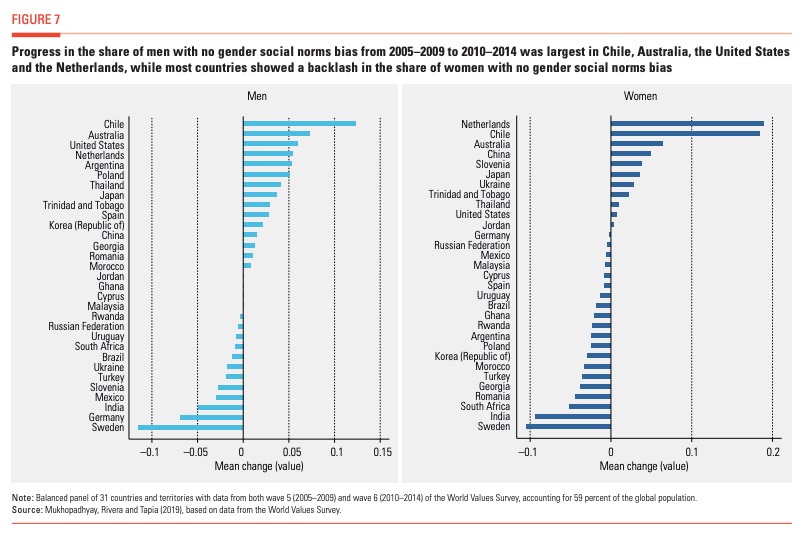 Looking at gender inequality, a behavioral economist could cite an expectations bias that became famous through a discrimination exercise. In an Iowa classroom, a third grade teacher told her students that their eye color determined their capabilities. In every way, on Friday April 5, 1968, the brown-eyed children in her class believed they were better. Then, on the following Monday it was the blue-eyed children. And yes, expectations created results. On the day that certain students were proclaimed superior, indeed, they outperformed their peers.

Similarly, social norms can create an expectations bias. Because many of us believe that women are the caregivers and men, the breadwinners, the path of the 1995 Beijing gender roadmap has been blocked.

My sources and more: The 36-page UN report on gender bias was just published. After that, I also suggest this ILO Global Wage Report, a WEF gender report, and this Washington Post update. And finally, for a good read, do look that this Smithsonian Magazine article on the Iowa third grade teacher.

Six Facts That We Need to Know About Oil

All We Need To Know About Toilet Paper (Shortages)