What Red and Blue States Say About Sauces and Spreads

In “research” on the sauces and spreads we prefer, Thrillist tells us who likes what and where. The results provided a picture of yet another way in which our nation is divided.

Happily though, the disagreement is not always between red (R) and blue (B) states.

For the following, there is a real mix:

But we still find the divide when we look at Nutella and Sweet Baby Ray’s BBQ Sauce.

And no one but Maine chose Marshmallow Fluff.

Our Bottom Line: The Urban Divide

However, moving from food to finance, there is more of a red and blue split.

The NY Times tells us that while Silicon Valley (B) and Provo, Utah (R) are both booming, they are different. Those of us who live in blue “metros” are more likely to have a college degree, a higher median household income, and a greater share of occupations projected to grow faster. At the same time, for those of us in red metros, the jobs are easier to automate, there is more manufacturing, and a lower cost of living.

When the NY Times looked at metrics that included “education, household income, cost of living, non-routine jobs, and projected job growth,” it concluded that they correlated with each other and voting Democratic: 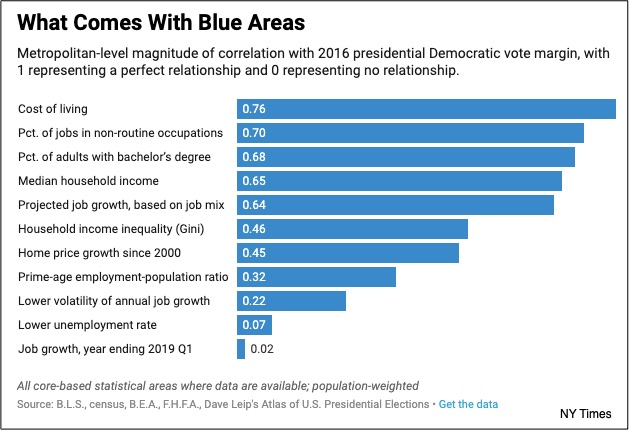 My sources and more: Thanks to Thrillist for the list of sauce preferences and World Atlas for the red, blue and purple state lists. Then, the NY Times Upshot column had the red and blue metro analysis.