In 2017, Uber added a tipping option to its app. Now, after looking at the data that relate to 40 million (or so) rides, four economists have a lot to tell us.

What Counts For Uber’s Tips

Your rating makes a difference

A mixture of drivers’ decisions affects us. 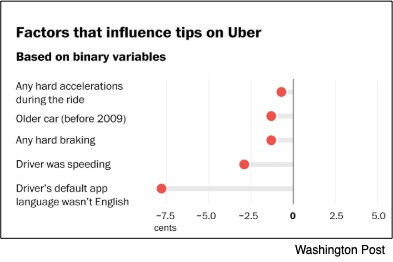 Where and when influence us.

Wealthier zip codes can pull tips up as will the size of the fare (but not proportionally as much as the higher charge). Also, drivers in smaller cities receive bigger tips than those in the larger urban areas. As for when, rides between 3 a.m. and 5 a.m. attract a larger tip as will one on a Friday or Saturday evening at 6 p.m. Surprisingly, midnight calls generate less.

How much affects riders.

As the number of rides rose, tipping fell. For their first 15 trips, riders tipped approximately a quarter of the time. But once we get to the regulars at 275 rides, tipping frequency descends to 10 percent with tipping default suggestions having a minimal impact.

Horrifyingly, 60 percent of Uber’s riders never tip while just one percent always do. So you can see why researchers call Uber tipping behavior a demand side story. Yes, driver decisions and location can matter. But whether we tip and how much is essentially a rider’s decision that the supply side won’t necessarily affect.

My sources and more: Not as good as it was with Ezra Klein, still, The Washington Post, Wonkblog occasionally has some clever articles like this one on tipping. From there, I checked the (un-gated version) of the NBER paper on which the article was based and then read what Wired said about the study.

What Red and Blue States Say About Sauces and Spreads