During August, I  thought we were at peak chicken.

The new Popeyes chicken sandwich was so popular that fans were lining up around the block. One employee made more than 600 sandwiches on a Saturday. He filled a single order for 35. Working 60 hour weeks at certain locations, the staff was exhausted and overwhelmed. They reported “chicken sandwich chaos.”

A Popeyes in Queens, NY temporarily had none: 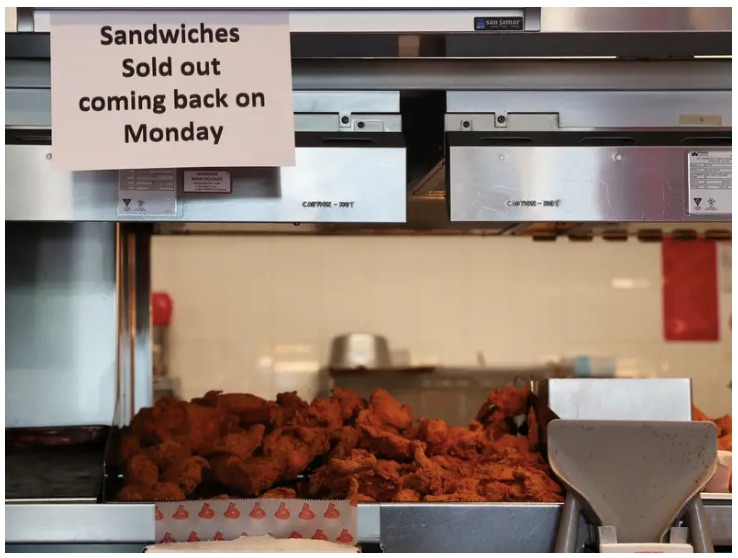 And then the whole chain ran out.

Food critics did say the sandwich was really good. But when Chick-fil-A attacked it on social media and Popeyes responded, the war had begun. The result? A three month’s supply ran out during two weeks in August.

Below, you can see the rivalry that fed the surge. After calling it the biggest debate of the century, USA Today staged a blind chicken sandwich taste test:

And now, after two months of preparation, Popeye’s said the sandwich will return next Sunday (when Chick-fil-A is closed).

Do take a look at these 20 seconds of  chicken sandwich fun:

As economists, we can just say that the chicken sandwich war is a supply and demand story for Popeyes.

On the supply side, they have to be sure that this time, they have enough. WSJ tells us that it took two months for them to locate vast quantities of small breasted chickens at the right price. (I gather there are many more large size birds.) More specialized too, the brioche buns’ ingredients needed quantity sourcing. A group that own 150 locations hired 400 extra people. They said they were dedicating two people per store to making the chicken sandwich.

As for demand, WSJ tells us that we are eating more breaded chicken. Although up by less, still the increase in breaded chicken sales continues to rise: 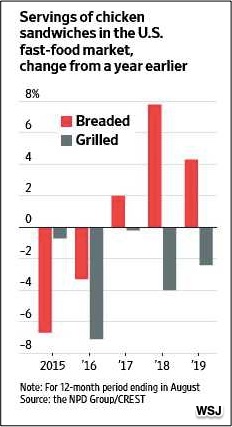 My sources and more: Having read an update of the chicken sandwich war in WSJ, I discovered there was still more. USA today had the Popeye and Chick-Fil-A blind taste test and Businessinsider added to the facts on the first round that we explained at econlife.