What the Grocery Store Says About Us

Boris Yeltsin’s visit to a U.S. supermarket could have changed Russian history. Some say it was really the Jell-O Pudding Pops.

The year was 1989. Soon to be the Soviet President, Yeltsin was here to see the Johnson Space Center. After the tour, with 20 minutes to spare, his group stopped at a Randall’s supermarket in Houston. The man was reputedly flummoxed.

He marveled at the variety of goods that were available: 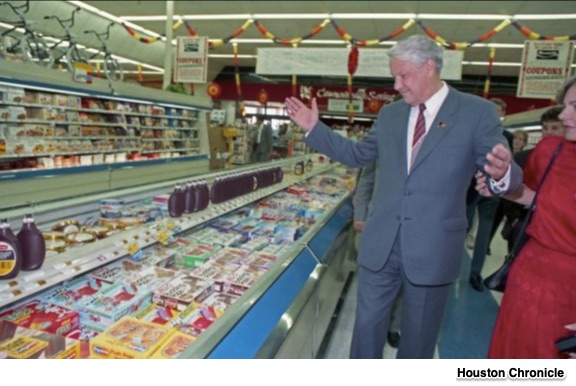 Yeltsin later said in his autobiography that seeing, “those shelves crammed with hundreds, thousands of cans, cartons and goods of every possible sort, for the first time I felt quite frankly sick with despair for the Soviet people.” In the Soviet Union, consumers coped with dour clerks, long lines, and shortages.

Where are we going? To what our grocery stores say about our economy.

When you think of the 21st century U.S. grocery store, the big ones could first come to mind. Led by Walmart and Kroger, the top 11 include Amazon’s Whole Foods and Trader Joe’s. Looked at together, we see thousands of stores and huge spending. Alone, each store is a bit different. While Walmart represents bargains, Whole Foods has a pricier organic selection, and Kroger has been called middle market.

In the grocery store list that follows, huge grocery sellers like CVS (drug stores) and Costco (warehouse) were excluded. Out of a list of 50, I copied the top 11 grocers : 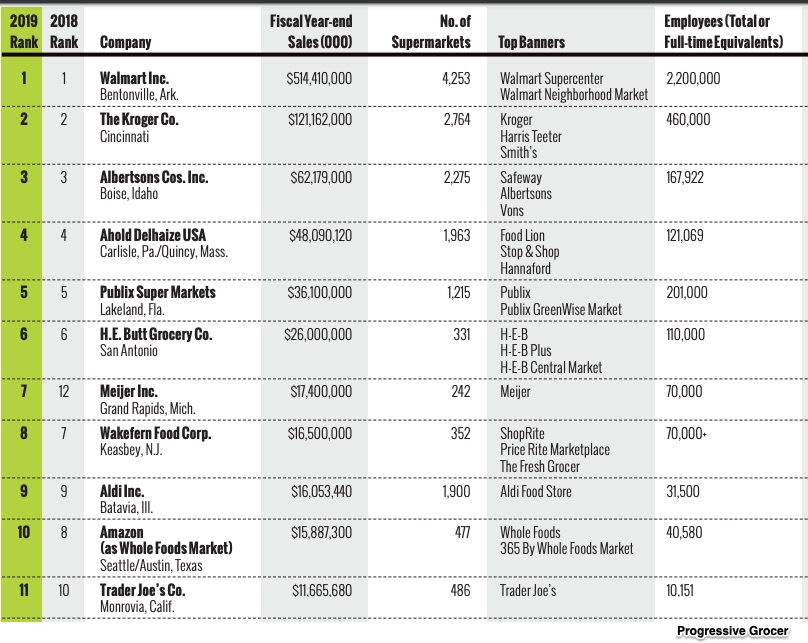 As consumers, we support an immense amount of product differentiation. Just choose an aisle. You could see chips that are plain, sea salt, cheese or onion. Who knew there could be so many kinds of yogurt? Even milk now could be almond, 2%, whole, non-fat, supermarket brand.

Our Bottom Line: More than the GDP

When we have more to spend, our demand for quality and variety increases. Meanwhile, technological innovation has enabled the retailers to know us better. Keeping track of what we buy, they identify what we want. And here is where time enters the picture, Having access to all we need in one store minimizes the time/food shopping tradeoff. So yes, we  make an average of 1.6 grocery shopping trips a week. But, a working mom and dad can do them quickly in one place, and buy some prepared food as well.

Our visits seem to been diminishing. I wonder if online shopping could be one reason: 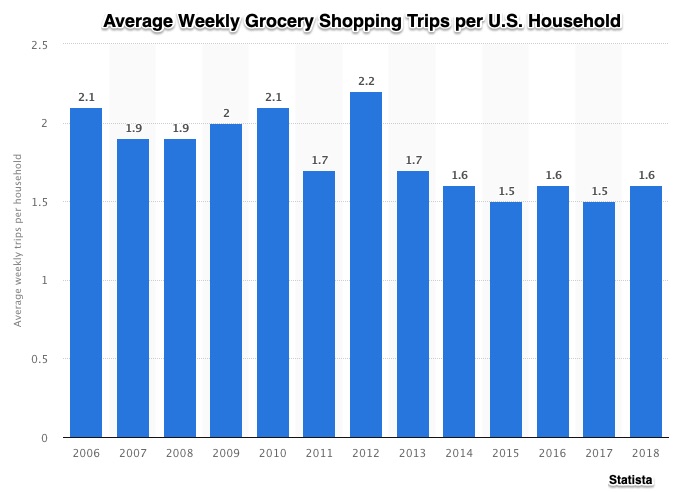 Returning to where we began with Boris Yeltsin and ending with 1.6 visits to the 21st century U.S., we can use a grocery store to learn about more than food.

My sources and more: Thanks to Duke professor Mike Munger’s blog for the link to the econlib grocery article. From there, the Washington Post takes an interesting look at Wegman’s while you can get the top fifty list from the Progressive Grocer. After that, for some history, the Houston Chronicle had the story of Yeltsin’s visit. And finally, if you still want more, do read Michael Ruhlman’s Grocery: The Buying and Selling of Food in America.

A Dilemma: How Much to Pay for Our Privacy Protection