In a Prime(d) podcast one woman described the three Amazon deliveries she received on a Sunday. One vehicle delivered her cough syrup, another her panty hose, and a third, some crackers.

I assume that each arrived in a corrugated box.

The  life of a new cardboard box might have begun with an old box in a Wisconsin paper mill. Sprawling across 1.2 million square feet, the mill is a mixture of buildings, tunnels, and railroad tracks. At the plant, those old boxes wind up in a machine called an O.C.C. (old corrugated container).  There, large bales of used cardboard are thrown into vats of swirling warm water where the cardboard becomes dense brown gruel. Next the gruel has to be strained because you and I throw out plastic, staples, and assorted debris with our used boxes.

At this point, the pulpy mixture travels to a paper machine where it is propelled by belts and rollers moving at 25 miles an hour. If all goes well, huge quantities of soupy glop become a massive role of rigid brown paper. Eventually, the paper becomes a corrugated box, is sent to Amazon, and then to us.

Yes, we’ve skipped a lot. Just keep in mind that many old boxes are recycled into new ones in the U.S. through a process that involves making the paper, the corrugation, and then the box. And that takes us to China.

But first, you might want to see this video. An Amazon box supplier. Georgia-Pacific presents the whole process:

We are doing more of our own box recycling because much less of our cardboard waste is going to China. Chinese companies have even bought U.S. paper mills because China no longer has the scrap it needs for its corrugated boxes: 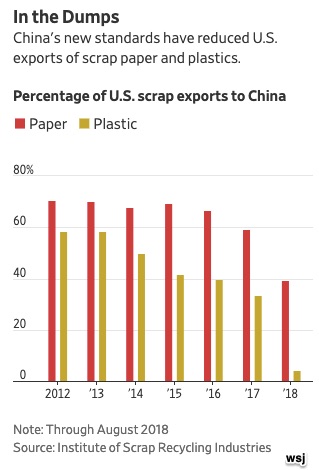 During 2018, Amazon spent more than $27 billion to ship our packages. Trying to cut costs, they delivered 26% of our online package orders themselves: 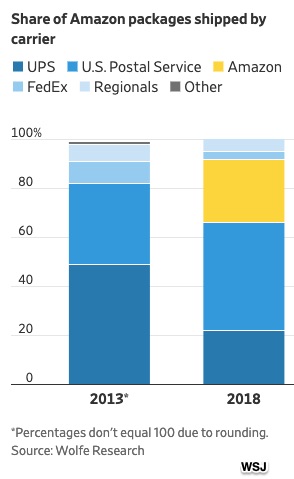 Amazon Prime’s five billion shipments during 2017 is one reason we’ve needed so many boxes. You know the incentive. When there is no charge for shipping, our individual orders multiply.

Here, an economist might cite derived demand. Defined as the need for a product because we want something else, corrugated boxes are the perfect example. During 2017, those 5 billion (or so) cardboard boxes we demanded from Amazon was not because we wanted so many boxes. It was because of the items that were shipped in them.

My sources and more: For many more facts about Wisconsin’s resuscitated paper industry, the NY Times told the story. Meanwhile WSJ, here and here. focused on Amazon while Amazon is all that the podcast Prime(d) investigates.

When $430 Million Is Not Enough