When to Worry About Water

Cape Town South Africa thought that April 16, 2018 was going to be Day Zero—the day they ran out of water. It didn’t happen.

Some say Cape Town’s water problem was because of climate change. There just wasn’t enough rain. Others say they hadn’t built enough dams or created enough water storage capability in a city whose population had doubled from 1995 to now. Whatever the cause, the problem could soon be no water running through the pipes.

So people were told to conserve. Last year, Cape Town asked everyone to use no more than 50 liters (13 gallons) of water a day: 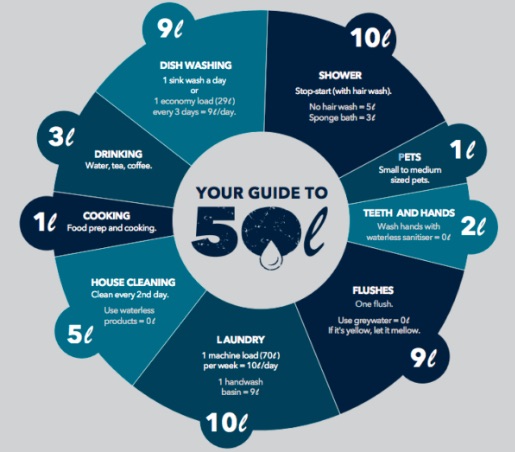 So, acting just like good behavioral economists, Cape Town let entire neighborhoods know who was conserving and who wasn’t. (It appears to have worked.) Also, they created a musical nudge. Sing a 2-minute song during a 2 minute shower.

We could say that Day Zero was about people and rainfall. People had to conserve and the skies had to open up. Both happened.

The trick now is to keep residents and visitors worried so they continue to conserve. Suburban homes have water storage tanks that people are continuing to keep full. It’s security. Just in case Day Zero arrives, they will have their own supply.

But based on Monday’s Water Dashboard, everything appears much better:

Adam Smith wondered why diamonds cost more than water when we need water to survive and diamonds are merely an extravagant luxury. Years later, economists had the answer.

It took them to the margin, to the cost of the next extra unit. With water, when there is a lot, the next extra glass, or flush, or shower costs little. Totally though, water is priceless. With diamonds, the opposite is true. We would rather have that one extra diamond and will pay a lot for it. But, the total usefulness of diamonds is small compared to water.

Economists here say that we are comparing total utility to marginal utility—total usefulness to the usefulness of the next extra unit that we consume.

I would venture to say that if Cape Town approaches another Day Zero, that extra bucket of water will have much more value than a diamond.

My sources and more: Quartz Africa had the Cape Town water story during May and before. Then NPR had the update from last fall and Time had more of the facts as well. Yesterday, though, I first took a peek at the Cape Town water dashboard and was fascinated. Meanwhile, if you want more on water, diamonds, and the paradox of value, econlib is always a handy destination.