A Closer Look at Apple in China

When CEO Tim Cook explained why he was revising Apple’s first-quarter sales guidance, China was a big reason. The firm’s new numbers related to China’s “deceleration.” He said in his investor letter that a slowing economy and trade tensions had reached Chinese consumers.

He might have added that his supply chain is also affected by those trade tensions.

The Peterson Institute explained the links in a typical 21st century supply chain. So although our focus is Apple, the firm could be a Nike or a Ford.

The beginning is U.S. based design and innovation. Next, that U.S. firm could send its manufacturing specs to a Taiwanese business. After the component is made, it travels to China. The last step is the Chinese assembly that creates the computers and phones (or now a Vietnamese site for Nike). The items then go to the U.S. where the tariff hits China.

Because a global supply chain blends many firms, it is impossible just to target China. It is even likely that a Chinese firm will not be hit directly. Instead, the collateral damage in this trade war is U.S. multinationals whose costs rise and ability to plan falls.

We could say that Apple dodged some damage when the iPhone sidestepped the first round of tariffs. However, in a November 26 interview with the Wall Street Journal, President Trump said iPhones could be next with a 10% tariff. And beyond that, with U.S. tariffs multiplying, their scattershot impact could touch any of the thousands of manufacturing sites of Apple’s 200 suppliers. 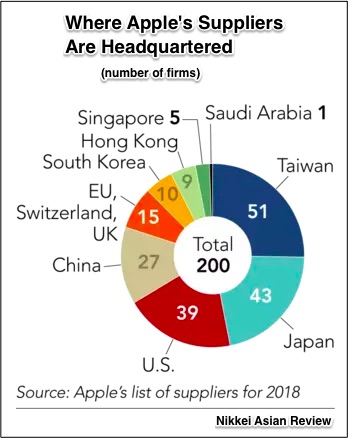 Long ago we said that the iPhone was like a pencil. Described in a classic essay called “I, Pencil” by Leonard Read, we saw that the two are similar because their assembly depends on the cooperation of people in different countries who rarely know each other. The only reason they join in a complex supply chain is the price. The money each producer receives is the incentive to participate.

And that is the wonder of a global market when it functions successfully… without the unpredictable ripple of tariff barriers.

My sources and more: Do take a look at Tim Cook’s letter to investors. Beautifully written, it conveys all that is special about Apple. Meanwhile, an Asian source came in handy through the Nikkei Asian Review, here and here, whereas reading a WSJ/Trump interview displayed the unpredictability of the China tariffs. Then, for yet another perspective, the Peterson Institute had the academic analysis. And there is still more from Businessinsider  about the Foxconn plant and from Lifewire for a long list of Apple’s factory locations.

Please note that most of Our Bottom Line was in a past econlife post.

Why Japan's Population is Shrinking