Getting Some Unemployment Insight Through a JOLT

Rather similar to a bad date, an employee doesn’t show up one day…and is never seen again. The phenomenon is called ghosting.

Ghosting typically referred to leaving a romantic relationship with no explanation. Now it’s happening on the job. As one economist explained, “Why hassle with a boss and a bunch of out-processing when literally everyone has been hiring?”

Some of us even ghost during the hiring process. One recruiter said she makes two offers for each job because one person usually is a no-show.

In a paragraph on tightening labor markets, the Federal Reserve Beige Book said, “several Chicago firms reported that some employees have simply quit – with no notice nor means of contact.” You can see the ghosting evidence is anecdotal but it makes some sense.

I suspect the JOLT Summary explains why.

You can see how job openings fall during a recession and then rise during the recovery as businesses expand:

Correspondingly, the number of “hires” increase:

But I wonder if the “quit” numbers particularly provide insight. Think for a moment about jobs that people dislike. During a contraction and especially the Great Recession, our optimism evaporates. If you were working, you stayed there. However in a healthy economy we are more willing to leave a distasteful job because an alternative is probably available.

Our Bottom Line: The Unemployment Rate

The unemployment rate has hit a low that we have not seen since 1969. At 3.7%, it tells us that six million people are out of work. 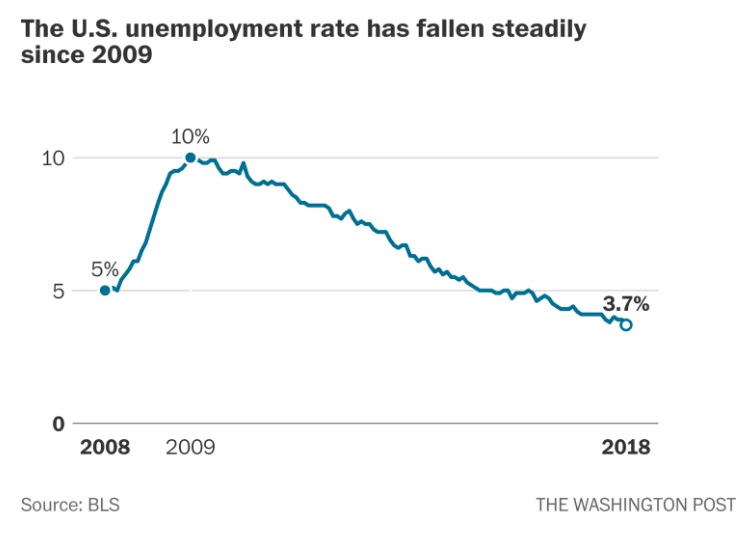 But there is more to the story. We calculate unemployment by dividing the number of people who are 16 and older and in the labor force by the size of the labor force. That gives us this fraction: 6 million/162.6 million. Since groups of individuals such as those who are called “discouraged workers” are not included in the fraction, there actually are additional people who are unemployed.

What about the people who quit? The unemployment rate includes them if they are looking for a job.

My sources and more: Thanks to my friend Rashied for alerting me to ghosting. From there I discovered this Washington Post article with the perfect explanation. Lastly, for a firsthand look, do go to the Beige Book, to the December JOLT report, and to these FRED graphs on Job Openings, Hires  Quits,

Please note that several of today’s sentences were in a past econlife post. Our featured image is from Pixabay.

Almost Everything We Need To Know About Gift Giving

Why We Should Care About the Night Time Economy