Almost Everything We Need To Know About Gift Giving

We could say that gift giving is a combination of economics and psychology.

On the economic side, there could be “deadweight loss.” That just means the gift is worth more to the giver than the recipient. Think a $100 sweater. If the recipient is far less enthusiastic, the value of the $100 present could plunge to $70 with a $30 deadweight loss to the economy. According to one economist, most holiday gifts lose from one-tenth to one-third of their value.

However, as we know, cost and benefit are more than money. When two marketing researchers compared the value of similar or identical items that people bought for themselves and those that were gifts, the gifts got the higher valuation. The reason? Their sentimental value had a long-lasting impact. Or, as they concluded, it “staved off  the detrimental influences of hedonic adaptation.”

Yes, the bottom line is what we actually spend. This is the data from the National Retail Federation (the NRF).

Meanwhile, our non-gift holiday spending will be approximately $155:

Including “other purchases,” it all adds up to an estimated $1,007 that the NRF says each of us will spend on the holidays in 2018:

However, what we want and what we plan to give are not quite the same. With gift cards first and clothing second, people have named the gifts they prefer: 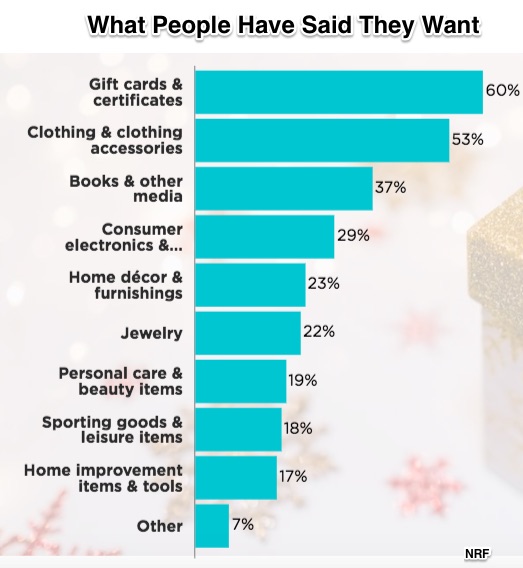 And it gets worse. Younger shoppers (18-24) will probably create more deadweight loss:

Finally, last year, the NRF predicted a 13% return rate (that made FedEx and UPS happy). Below you can see what we sent back according to Optoro, a tech firm that helps retailers manage their returns:

My sources and more: A good starting point, The Money podcast from Australia reminded me of Joel Waldfogel’s Christmas (non) gift paper. I even discovered a gift-giving primer from research published by the University of Minnesota that paired perfectly with NRF spending data and Optoro’s return facts. But if you just want gift-giving advice, this Washington Post article has it all. And this paper on sentimental value provides the psychological lens.

Getting Some Unemployment Insight Through a JOLT