The Economics of Skiing Across Antarctica

Across a 921-mile stretch of Antarctica, two men are racing. Unassisted, each is alone. Unsupported, they are not allowed to receive a food or fuel drop or to use a kite for wind power. All each needs is on his pulk. The winner will be the first person to ski across the Antarctic alone with no assistance.

Like climbing Mount Everest, the quest is for extreme athletes. Colin O’Brady and Louis Rudd each had planned to do it alone. But their timing coincided and it became a race. They will be skiing a mile apart.

This is where they are going: 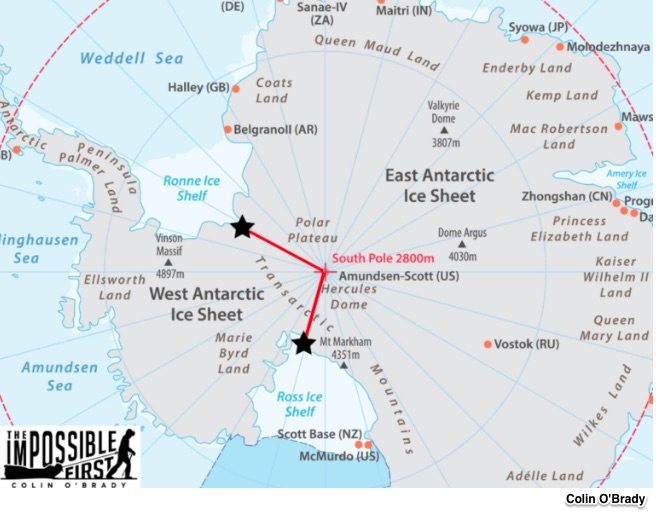 And where are we going? To the economic side of their trek.

Together they left from southern Chile. The last leg was a 90-minute flight on a Twin Otter ski plane to the Ronne Ice Shelf. On November 3, the plane dropped off one of them, drove a mile, and then said good bye and good luck (I assume) to the other. At minus 25 degrees Fahrenheit, the weather was called balmy. Fully packed, their pulks weighed 375 pounds.

You can see a pulk and the ice ridges called sastrugi: 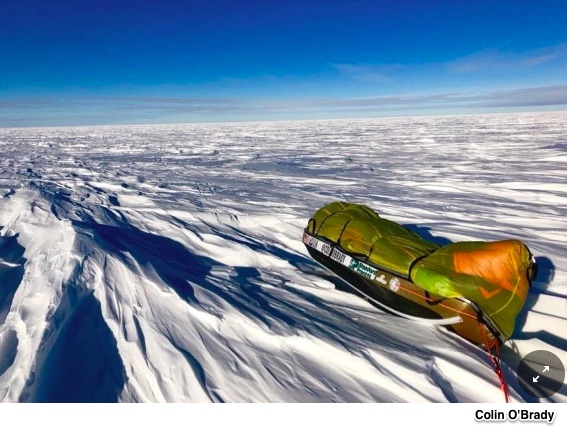 In a typical day, O’Brady got up at 6:00 or so and Rudd at 7:00. Each lit a stove. They had to collect snow for the day’s water supply and boil some. Their breakfast could have been freeze-dried oatmeal with extra oil and protein. Then each repacked his pulk, used the GPS attached to his chest, and was on the way. While their routines differed, basically they skied for 70 to 90 minutes and then stopped for a high calorie pick-me-up. O’Brady ate some Ramen for lunch while Rudd dug into his “grazing bag” for some salami and cheese or chocolate and nuts. For the night each had to set up a tent, a stove, lay out clothes to dry. Since they had 24 hours of daylight, solar panels were perfect for a charge.

O’Brady cubed his custom energy bars so they could defrost quickly: 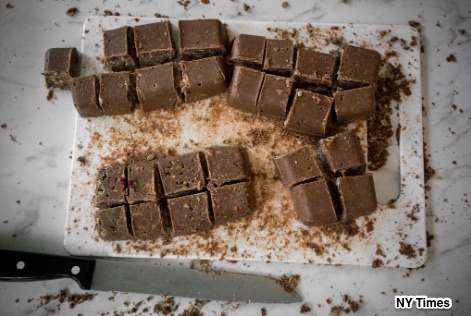 To survive, O’Brady and Rudd had to be very aware of their land, labor, and capital. Defined as all that was natural, the “land” was their adversary. It was their 921-mile/75 day route. It was the crevasses, the ice ridges, and the uphill climb to the South Pole at 9301 feet.

The key then was their labor, their human capital. All they planned, every decision was about staying alive. Ranging from how many calories to consume to daily mileage, each minor decision could become crucial. Even sweating was life threatening because it created hypothermia. Infections healed more slowly because of the cold.

As for their physical capital, it was all they packed. Each had a pulk, food, the tent. They needed their stoves and high calorie snacks that for Rudd included 15 pounds of instant chocolate. O’Brady took toilet paper while Rudd did not. For emergencies, O’Brady had the more elaborate repair kit. Their cross country skis were covered with synthetic skins for traction.

Indeed, these men never had a free lunch. Every land, labor, capital decision involved a tradeoff…

My sources and more: Having seen how climbing Mount Everest was the perfect case study for my textbook, I knew the Antarctica trek could also have an economic theme. So, if you want more detail, do go to the NY Times articles, here, here, and here. Then, for up-to-date news, Colin O’Brady’s website and explorersweb.com could come in handy.

This is the day 33 update (Since he left on November 3, I assume Day 33 is today.) He appears to be halfway: