Facial recognition equipment is about more than people. Now, knowing your cow can also make a difference.

Where are we going? To the spillover from new food technology.

According to WSJ, 14,000 cows are now being watched. We’ve read that China has cameras to catch jaywalkers. But in dairy barns they are being used to observe errant bovine behavior. Knowing each cow, you can quickly see who is ill, who runs out of food, and who is hungrier than usual. You can observe how the path of a feed truck affects eating patterns. You get the basic picture. The goal is to get an alert and remediate quickly.

An edible coating has been developed that can retard spoilage in supermarkets, restaurants, and at home. One possibility is grape skins that are made into an ultra-thin sprayable coating. Applied to fruit like avocados and strawberries or vegetables like green beans and asparagus, the innovation could let farmers harvest produce when it is riper and also facilitate slower, cheaper shipping.

Using 3-D technology, machines can create made-to-order food dishes. In restaurants, the equipment is being used for complex desserts. The home version, not yet available, will be able to make food in any form you want. A family for example, places bread crumbs in one ingredient container and ground chicken into another. Told a dinosaur or star, the equipment cooks and shapes the meal. At the same time, we could control fat and calorie content.

New DNA technology permits us to identify and trace individual food items. An apple’s wax spray, for example, could include a tasteless “bar code” ingredient. In case of any tainted food outbreak, it would be much easier to locate the source, just by checking a fruit or vegetable’s DNA identifier. One glitch? You can’t eat the whole apple. You can though follow the path of produce that you suspect is problematic.

The Wall Street Journal tells us that food research and development has recently picked up. You can see that the private dollars going to food tech deals is way up although not the number of deals: 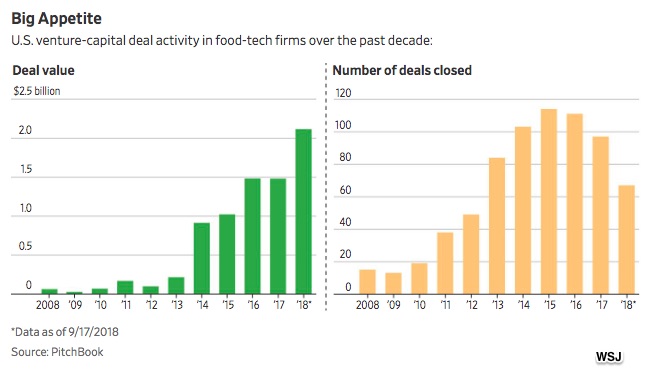 The good news is sometimes a technology that appears minor could have a broader impact that we can call its spillover. When University of Pennsylvania economist Edwin Mansfield (1930-1997) described the spillover of a small innovation, he was referring to industrial thread. His point was that a social return to many of us can ripple far beyond the profit received by just a few inventors and manufacturers.

A paper from Project Syndicate tells us that cleaner water from filtration and chlorination could have led to more than half of the mortality reduction from 1900 to 1936. Or, we have the first Ford tractors diminishing the number of animals farmers needed for planting and harvesting. As a result more of their crops went to human consumption. The mind-boggling example though is Nobel Laureate Norman Borlaug’s “shuttle breeding” through which wheat became a much more productive crop. From there, the technology spread and eventually you had a Green Revolution whose final social benefit has been estimated as saving hundred of millions of people from starvation.

Perhaps the facial recognition that led to cow recognition is only at the beginning of its spillover.

My sources and more: Thanks to WSJ for its article on food innovation. From there, this somewhat old but timeless Hamilton Project paper was a good source for the impact of innovation. Finally, and somewhat unexpectedly, I learned more about Dr. Borlaug in this interesting Freakonomics about an environmental “wizard” and a “prophet.”

How Your Whisky Can Signal Your Wealth