Last September, a bill flopped in the California state legislature. Advocating an 8:30 (or later) start time at schools, it fell far short of the votes it needed. Currently they are reconsidering.

I wonder if those lawmakers know they are really talking about the GDP.

The Wake up Call

In California. the average school start time is 8:07. By moving it 23 minutes later, we could diminish tardiness and car accidents. Researchers hypothesize also that graduation rates would rise.

Studies show that teens would go to bed at the same time but sleep later if school began after 8:30. They would also get better quality sleep during the morning hours. In dollars, a Rand study reports that after the initial cost, the benefit to California alone would be $10 billion ($83 billion for the entire U.S.) if you just project fewer auto accidents (20% of teen accidents from sleepiness) and higher graduation rates. From there, they say, students then move onward to better jobs and more of an economic contribution.

The predicted gains in state domestic product could be considerable: 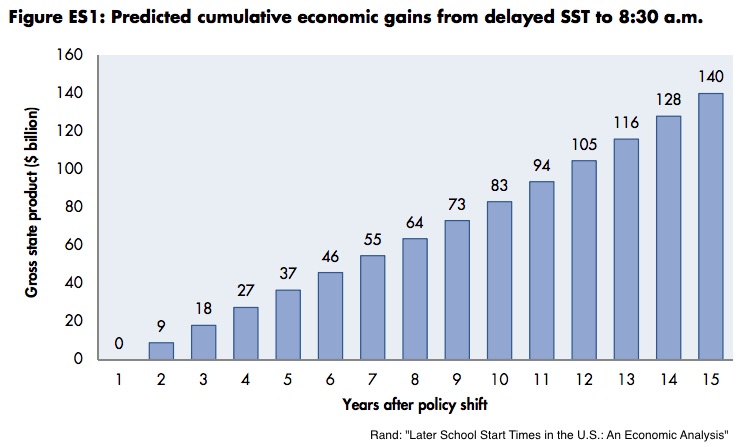 As did I, you might suspect that some of this reflects a statistical leap. But even when we consider the high cost of compressed bus schedules and lighting for later activities, the basics make sense.

Really, we are just talking about human capital. As a resource that fuels economic growth, human capital includes our education, entrepreneurial spirit, and health. With U.S. economic growth at a 2.2% rate for Q1 (2018) and 4.1% for Q2 (2018), maybe we could sustain the increase by giving adolescents a bit more sleep?

And finally, I could not resist this xkcd cartoon. After all, the impact of sleep deprivation extends far beyond teens.

My sources and more: This LA Times article tells about the California schools sleep bill rejection while this site has the update. But for a report chock full of detail, do look at the original paper from Rand or this summary.

Please note that I repeated several phrases from a past econlife post on the same topic.