From a BBC article on names:

“I used to have a doctor called Doctor Nurse, and his wife was a nurse called Nurse Nurse. Honestly.”

Researchers have hypothesized that our name nudges us toward a certain profession. Called “nominative determinism,” the phenomenon was explored in a 2015 paper by four doctors named Limb. One of their first examples was an article on incontinence written by A.J. Splatt and D. Weedon.

In their paper, the Limbs’ goal was to connect names and medical specialties. Using 313,445 Medical Register entries, their data ranged from anesthesiologists to microbiologists. It included a pediatric surgeon named Young and a general surgeon called Butcher.

These are some other examples:

Rather than names though, our goal is to focus on the jobs. We will look at why health-care will become a job engine.

Health care has become a job creation leader. One reason is an aging population. Soon, 25% of the U.S. workforce will be over 55. In addition, health care is non-exportable. Jobs can multiply because they are not subject to global competition nor outsourcing. And for now, health care is resisting automation.

The result? According to the BLS, health-care practitioners and support jobs will be among the fastest growing job categories during the next eight years. In the BLS list of top growing jobs, physicians assistants and nurse practitioners are where we will earn the most: 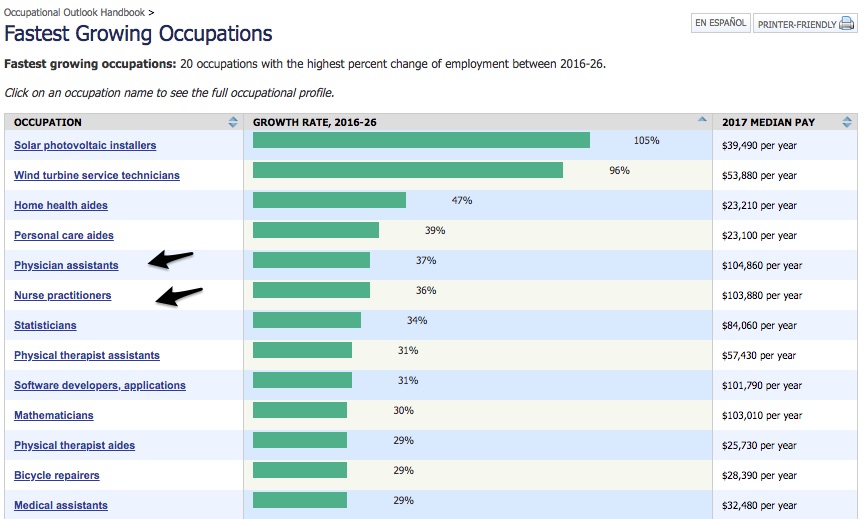 If you look back to the 19th century, the railroad was an industry leader. As an idea, the railroad created jobs when towns across the country prepared for its arrival. Then, the building process stimulated a ripple of employment and innovation in industries than ranged from steel to sleeping cars. And finally, as a transportation infrastructure that crossed the land, it led to the regional specialization that further generated economic growth.

Jumping to the early 20th century, we can name the auto as a leader. Again, in factories and beyond, we had an industry fueling job creation. Suburbia, gasoline stations, and an interstate highway system were only a few of the innovations that responded to the auto.

And now, we have health care (the blue line) becoming a job creation leader. You can see how its job numbers have spurted:

So, although the cause relates to demography and globalization immunity, still we will have more Popwells who are chiropractors and Carvers who help with surgery.

My sources and more: Thanks to 99% Invisible for introducing me to the “World of Aptonyms.” Their link to the paper on physicians’ names could come in handy for some interesting conversation. Then, for a lighter read, I recommend this BBC article and Mental Floss. And finally, this Atlantic discussion of health-care jobs is the perfect complement as is the BLS, here and here.

The Value of Work Done at Home

What We Do and Don't Know About Immigration