The Value of Work Done at Home

When asked what his wife does each day, an African pastor once said…

“Nothing: sits home, eats my money, and gossips.”

But then, Nobel Laureate Leymah Gbowee asked what the wife did first thing in the morning. Told that she prepared hot water, Gbowee asked how much someone would charge to do the job.

You see where this is going.

Gbowee wanted a cash equivalent for all the wife did. After calculating her (invisible) value, the pastor saw that his wife earned more than he.

I do applaud that he recognized her work had value. But figuring out that value is not quite so easy.

What Household Production is Really Worth

After reading one UN paper, I realized that there are countless ways to calculate the value of boiling water. As did the pastor, you could use the market value of the activity. The market value though depends on whether it is a chef or a housekeeper or a home aide doing the work. Alternatively, we could have used an input method that relied on the number of hours spent on the activity. Or, we could have based the value on the opportunity cost of the work and identified the amount of income that had been sacrificed.

And this is just boiling water. Think of childcare. Imagine someone who multitasks by making dinner, watching an infant, and helping a teenager with homework, all at the same time. Or just ask if your metric should be a live-in nanny, a private nursery or state-run childcare.

Or, please ponder this seemingly straightforward list of activities. The complexities are endless:

In the United Nation’s “Guide on Valuing Unpaid Household Service Work,” one Swiss group displayed how disparate the results could be for different wages:

All of this had me wondering about the BEA (U.S. Bureau of Economic Analysis) approach. Annually, the BEA uses time use totals with the wages of “general purpose domestic workers to estimate the value of unpaid work.”

Our Bottom Line: Household Production and the GDP

During the 1930s, Nobel Laureate Simon Kuznets used paid production to create the basics of national income accounting–what we now call the GDP. Looking for a metric on which to base a yearly comparison of what we produce, he decided to include only goods and services that could be legally purchased. The value of unpaid work done at home was excluded because it was tough to quantify. 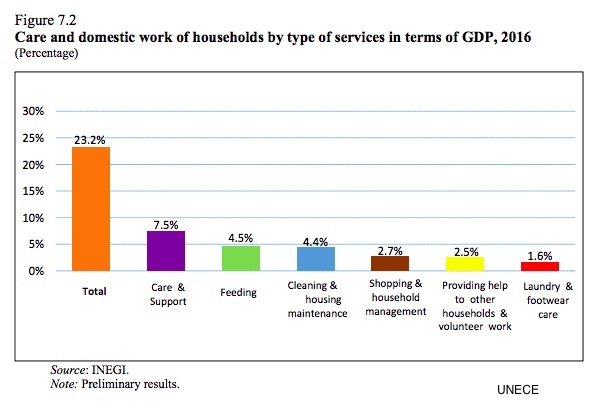 I would like to suggest that whenever we do see a clear and concise measure of household production as a proportion of the GDP, our statistical alarm bells should start ringing…

Even if we are just talking about the value of boiling water.

My sources and more: This Quartz article reminded me that it was time to take a fresh look at the value of household production. But then I went to a recent voluminous UN report and realized it was a hopeless undertaking. And yet I still worry about excluding (and thereby undervaluing) the work that is primarily done by women.

Please note that several sentences about Simon Kuznets were in a previous econlife post.

Why an Economist Can Solve a Poop Problem