Why Bitcoin Is Not a Security

An orange grove and bitcoin are actually related because of a Supreme Court decision. Here’s how…

During 1946, the U.S. Supreme Court used a case about oranges to make a bigger statement about securities law. Their focus was a land sale.

Everyone wound up at the Supreme Court because of a regulatory dispute. Although the orange grove transaction did not look like a traditional stock or bond, still the SEC said it had the authority to regulate it like one. The Supreme Court agreed through what came to be known as the Howey Test.

2) In a common enterprise,

3) Where people expect profit from others’ efforts.

The result? You have a security that the SEC (Securities and Exchange Commission) can regulate.

Now, more than 70 years later, the Howey Test is again in the news. Because of bitcoin’s decentralization,  the SEC will not regulate it as a security. Consequently, they need not follow the same rules that apply to stock and bond markets.

How we regulate bitcoin depends on what it is…

Maybe though this money flower from the Bank For International Settlements best tells us what bitcoin is: 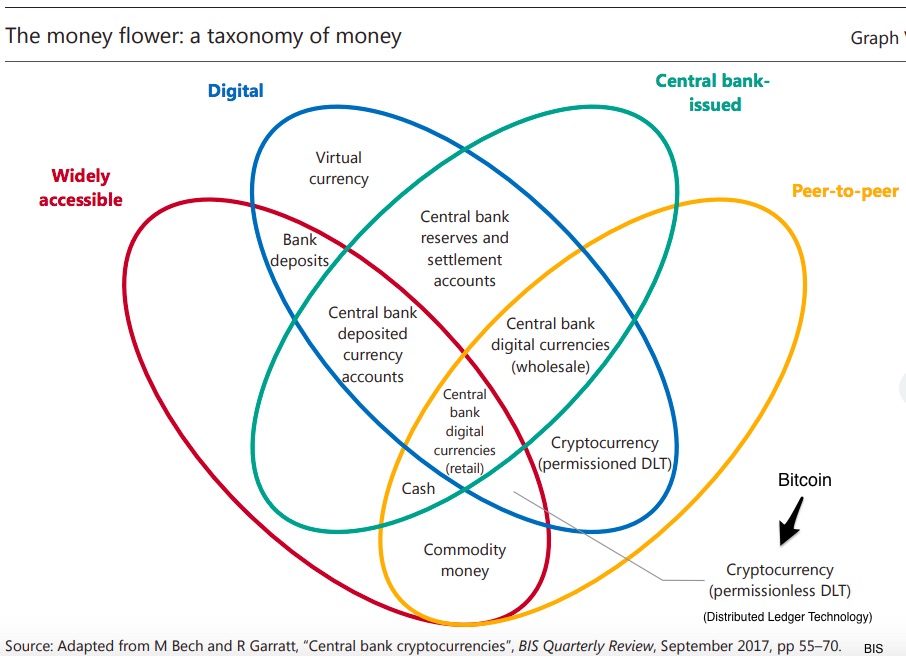 My sources and more: Thanks to marginalrevolution for alerting me to the Howey case, But for the clearest analysis of whether a cryptocurrency is a security, Wired was best. From there, for more up-to-date news, do look at this CNN article and CNBC  and this report from the BIS.

In addition, I recommend the following sources from my December bitcoin post. Please note that two sentences in Our Bottom Line were in that post.

My sources and more: When I became increasingly frustrated that bitcoin was called a cryptocurrency, I found that a WSJ journalist had the same issues. To start though, you may want to read this bitcoin primer from a St. Louis Fed blogger. It is brief and clear and ideally complements this Washington Post article. Then finally and fascinatingly, MarketWatch details the regulatory status of bitcoin around the world.

After completing this post, I read this Quartz article on Nigeria’s use of bitcoin. As an offset, it displays the potential role of bitcoin in a developing nation with a less stable currency.

How Starbucks Coffee Bean Husks Are Like Perdue Chicken Paws

The Woman Who Wants a Moon Dust Market