What You Never Expected To Hear About a Traffic Jam

At a meeting of the Portland, Oregon City Council, one man sang a song about traffic. The song explained what he believed created traffic jams. He called it “induced demand.”

Let’s start with the “fundamental law of road congestion.” Its premise is that more roads create more traffic. Or, as the Portland City Council song said,

“…adding more lanes is never done, because if we build them they will come.”

In a 2011 paper, a group of researchers amassed huge data to prove the law. They compared the kilometers people travel to the length of our interstate highway system. They had the numbers for households and truckers. They considered populations, migration, and public transit. As for the roads, they even had Federal Highway Administration numbers on the number of cars passing through certain points on certain roads in specific lanes. In addition, their study was vertical and horizontal. It looked at changes from one decade to the next and among different places within one time period.

You get the picture. They used a lot of numbers to conclude that more road mileage (or kilometers in their paper) results in more driving. These were their conclusions in my simplified words. (The numbers are all in the paper):

In addition but less significantly:

Of course, some have said that the paper describes correlation rather than causation. But whichever it is, we should be more skeptical about the traditional infrastructure solutions to traffic congestion and road disrepair.

As economists, we can explain the fundamental law of road congestion. First supply (road kilometers) changes and then we get more quantity demanded. In other words, supply “induces” demand.

You can see below that a supply shift moves us to the right on our demand curve. 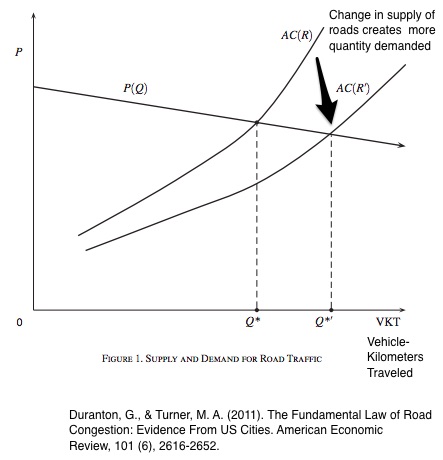 And that returns us to where we began. Here is more from the Portland City Council song:

“In the ’60s we built the interstate

But it should be clear the system is broken and adding more lanes is just a futile token.

Because the thing we need to understand is induced demand.”

So, if anyone says we can stop the spread of traffic jams with more roads, just say you have a song to sing.

My sources and more: Reading the Atlantic’s City Lab, I came across the induced demand song (at 10:27). From there, Wired had more on adding lanes as did this paper. But the big story is why we should worry about Infrastructure Week.

Deciding If Your Digital Assistant Is Unethical