When a group of scientists identified the most charismatic animals, they wound up with this list:

Their goal though was far more than a popularity contest. Those researchers wanted to be sure that our most beloved species were being preserved.

Through methods that ranged from survey questionnaires to media attention, researchers tried to identify the animals that most attracted our “empathy and interest.” They got their data from adults and children, zoo websites and Disney publicity.

From there they moved to the wild. Hoping to see that the animals that populated our virtual existence were as safe and plentiful in the real world, they found precisely the opposite. They called it, “The Paradoxical Extinction of the Most Charismatic Animals.”

These are the declines during past decades. Multiple giraffe and elephant species are included while the wolf is not pictured:

Next, those researchers concluded that we are all misled. Because people see these animals everywhere in their everyday lives, they assume they are fine. Consequently, when asked, “Is this species endangered?” many answered incorrectly.

You can see below how wrong they were: 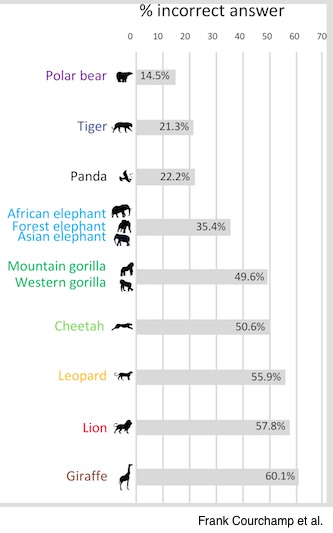 At this point, a behavioral economist might take us to an anchor.

Shaping our decisions, anchors precede a response. Nobel economics laureate Daniel Kahneman used a rigged wheel of fortune to explain anchoring. After it landed on either 65 or 10, participants estimated the number of African countries in the U.N. The people who saw the wheel stop at 65 were more likely to say a higher number for the U.N. question than those that got the 10.

In other words, an anchor creates information that nudges our decisions in a certain direction–even when that anchor is irrelevant. For charismatic animals, that anchor could be an animated video or a zoo’s website. Each conveys an aura of well-being that remains with us when we need to decide whether a species’ existence is threatened. Like the wheel and a question that required a guess, we see happy virtual animals and guess the real ones are fine.

My sources and more: Thanks to marginal revolution for another interesting link. They nudged me along a path that started with this BBC article. From there, the original paper was my next stop. But I ultimately wound up at (and highly recommend) Daniel Kahneman’s Thinking Fast and Slow.

The Waze Wars That Locals Were Losing