Among the big spenders for Super Bowl LII, Amazon purchased at least 2 1/2 minutes of ad time.

Here, you can see what happens when Alexa loses her voice:

But this Amazon ad is really about more than one firm.

Some Ad History and the Numbers

It is about how businesses convey their message.

You can see (below) that in just one decade there were 25% more spots occupying 18.6% more time:

And, since 2008, this is what businesses have spent…

…On ads that mostly ranged from 15 seconds to a minute: 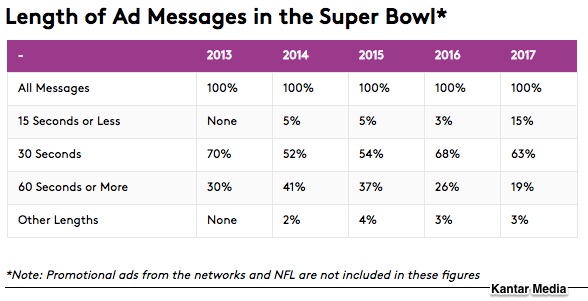 Our Bottom Line: Some Ad History and the Economy

The bigger message though is about our economy. Through decades of Super Bowl ads,  we can look at where we have been, where we are, and perhaps, where we are going.

The legendary 1984 Apple ad foreshadowed the creativity that Apple brought to tech.

A subprime lender, Ameriquest (unintentionally) displayed how to blow a housing bubble.

After its decline during the great recession,Chrysler let us know that it and the U.S. auto industry had returned.

And now, in Super Bowl LII we have Amazon’s message.

My sources and more:  Thanks to Quartz for giving me the economic springboard for this post and some Amazon Super Bowl background. Equally crucial and always good for learning about Super Bowl advertisers, Kantar Media had the facts.

Doing an Environmental Good Turn With a Revolving Door

Weekly Economic News Roundup: From a Latte Price to an Amazon Bid