When you measure the height of Mount Everest, it’s tough knowing precisely where the top and bottom are.

At the top, you could include the snow base. But the next day, the wind and weather would shift it. You could drill down to the underlying rocks. And you might or might not include any manmade objects that affect the height.

Similarly, identifying a “bottom” creates dilemmas. For Everest it is sea level but it could have been the center of the earth or the ocean floor. And, even if you agree that sea level is it, again different groups do it differently.

Our point here is that seemingly precise numbers aren’t necessarily accurate. Depending on a slew of decisions, they could even be wrong.

Similar to Everest, some NAFTA numbers are a challenge.

One example (currently being renegotiated) is the “rules of origin.” Where a good was made matters because tariffs depend on the answer. To be duty free, a certain percent of an item needs to have been produced in the U.S., Mexico, or Canada.

A car for example has more than 300 pages devoted to the criteria for determining if it has 62.5% content from the three NAFTA countries. Take an electric motor. It could have come from Asia, gone to Mexico and been used in a Mexican-made car seat. Even boxer shorts have more than one entire page in NAFTA’s regulatory tomes. There, the focus is the types of fabric that qualify.

Like the height of a mountain, the origin of the trillion dollars of goods that move among the three nations can be debated: 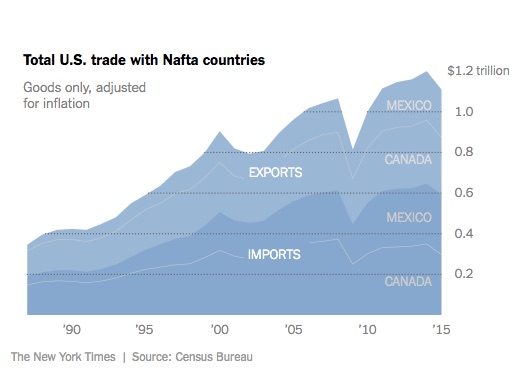 Our Bottom Line: A Statistical Oxymoron

For Mount Everest, climbers are looking for the highest altitudes. When Everest got a lower height from China, they shifted from the Tibet side to other peaks.

With NAFTA, rules of origin create incentives. Increased, the rules can encourage manufacturers to avoid NAFTA entirely. On the other hand, if they result in compliance, efficiency can suffer because the parts might not be optimal and the paperwork multiplies.

All of this leaves us with an awkward conclusion. We have said that a precise statistic is really an oxymoron. And yet we need the numbers for Everest and NAFTA’s rules of origin.

My sources and more: Up-to-date and interesting, the best Mount Everest measuring story was in the NY Times.and also from Newsweek. Meanwhile, a rules of origin podcast actually made one of my walks more pleasant. And, if you want more, the related paper is here.

The Mom Penalty and the Dad Bonus

The Contest That NYC Didn't Want To Win