When approximately 43,000 people in 38 countries look back to 1967, some say life is better but others do not.

The Pew Research Center gathered their answers last spring. The most positive response came from Vietnam and India. The most negative was expressed by Venezuelans:

Pew concluded that people’s view of their economy seems to have been the key variable. You can see below the correlation between “life is better” and “the economic situation in our country is good:” 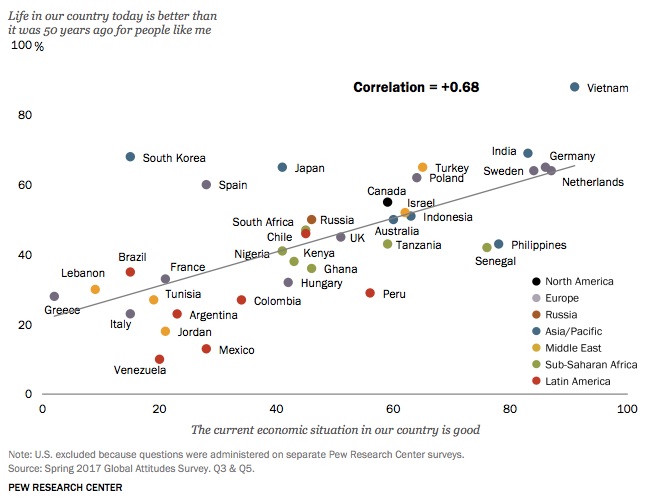 Where are we going? To the GDP.

The GDP is mostly composed of the value of a country’s consumer, business, and government spending. And yes, if you look at the U.S. a climbing GDP meant better food on the table, more bedrooms in our homes, and the innovative appliances (like a washing machine) that make our lives easier. Correspondingly, at work, fewer hours bought and brought us additional goods and services.

As a well-being yardstick, though, the GDP can be rather controversial. In the OECD’s Better Life Index, the environment, community and health are included among the criteria that measure national well-being.

This is their full list which they then break down into more specific standards: 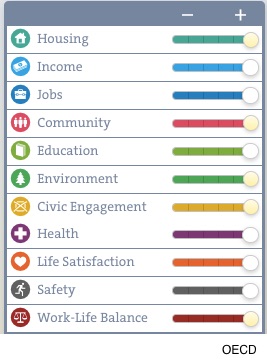 Nine years ago, France’s former President Sarkozy felt so strongly about GDP inadequacies that he created a commission. Led by Nobel Laureate Joseph Stiglitz, the commission’s report explained “the limits of the GDP.”

In a 12-page overview, they included the following recommendations:

So, returning to the Pew life satisfaction survey, where does all of this leave us? There probably is no right or wrong yardstick. We just need to remember that, “What we measure affects what we do.”

My sources and more: H/T to Mark Perry at Carpe Diem for alerting me to the Pew Research. Only the beginning, the next logical step was to see the detail at Pew, And then for contrast, the Better Life Index and Stiglitz Report were ideal.

Why a Starbucks Christmas Tree Frappuccino Has a Brief Life

How Many Peanuts Are in Real Peanut Butter?