The Town That Is Fighting a Leaf Blower War

Assume you drive from Los Angeles to Denver. Then, you blow leaves for one hour. The leaf blower will create more “smog forming” pollution than your car: 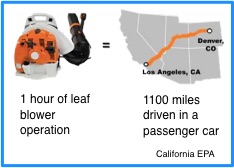 Where are we going? To delayed gratification.

But first, a leaf blower story…

Maplewood, NJ has said that on all Sundays and from May 15 to September 30, businesses cannot use gas powered blowers. They also limited when residents could use them throughout the year. Their reason? Pollution and noise,

Responding, the New Jersey Landscape Contractors Association and nine private landscapers have taken the town of Maplewood to court. They say the ordinance harms their businesses and creates inefficiencies. The town has said it will respond to the complaint by January 4, 2018.

You can see that small spark-ignition engines like leaf blowers emit a disproportionate amount of pollution:

And yet, at approximately 12 million, the total number of leaf blowers continues to grow. The California EPA even projects that, in the Los Angeles area, total passenger car emissions will be half of small non-road engine emissions by 2031 .

Our inability to delay gratification could be one reason for this lopsided statistic.

At Stanford’s Bing Nursery School, children were first asked to choose among a selection of sweets including marshmallows and Oreo cookies. To get one of the treats, a child had to ring a bell that would summon an adult. To get two treats, the child had to wait until the adult returned. After individually testing more than 550 children, Dr. Mischel observed that certain 4 year-olds could delay gratification for 20 minutes while others capitulated immediately. (Following up years later, he found that the more patient children had a better chance of getting higher SAT scores and achieving professional success.)

Somewhat similarly, a group of South American fisherman were recently observed by a marine biologist to see if they would constrain their current catch to preserve a fishery. And like Mischel, she found that short term gain had long term consequences. As this Atlantic headline indicates:

We should note that with the fisheries, the individuals that endure the current “pain” will not necessarily enjoy the long term benefits. For that reason, the marine biologist suggests creating the incentives that support the tradeoff.

I suspect the Maplewood leaf blowers also need some short term incentives…as might many of us.

My sources and more: H/T to the WSJ Numbers column for its thought provoking emissions statistics. From there, I discovered (and recommend looking at) data from the California Environmental Protection Agency in its Small Engine Fact Sheet. But, if you want more about the Maplewood ban, do go the description of the ordinance and the lawsuit. And finally, The Atlantic had the delayed gratification fisheries story.

Why China Wants To Be Called a Market Economy