In Sweden just 13% of all product searches start with Amazon. For the U.S. that number is 45%. Wondering about the difference, I started to do a bit of research.

Where are we going? To e-commerce spending.

As of April of this year, there was no Swedish Amazon. One reason could be a crucial domain name. In 2014, Amazon unsuccessfully tried to buy amazon.se from a Swedish ad firm called Amazon AB. Only now, for $554,500 (5 million kroner) did they get their smaller namesake to change their mind.

Could the following also have happened?

On July 10th, 2014 France outlawed free book deliveries and placed a floor under discounts. The goal was to protect independent booksellers. One result was the penny that Amazon charges for every book shipment in France.

So yes, as Amazon and its competitors globally grow online spending, each country has its own stories. But the common denominator for most is the increasing importance of e-commerce. The numbers though do vary.

At the top is China. Using Tmall, the proportion of Chinese shoppers that start searches online is 61%. Looking elsewhere at Amazon’s numbers, we have Japan and the Philippines leading the list at 54% and then Indonesia at 46%. Just a notch lower, 45% of shoppers in the U.S. and Germany start searches with Amazon.  The bottom? Poland at 11%.

Below you can see the worldwide leaders in online spending: 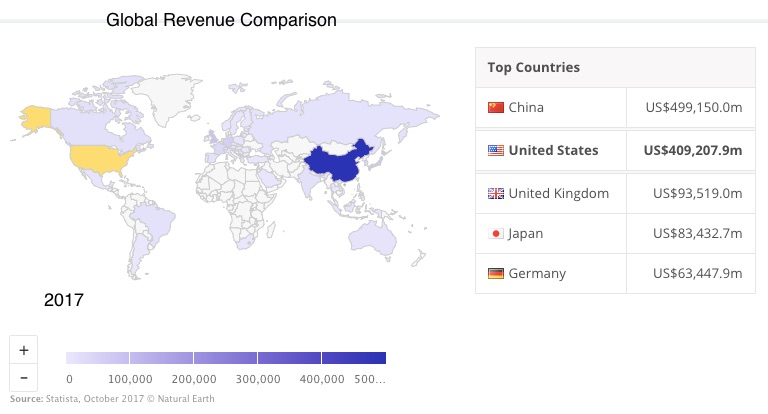 As economists, we should relate e-commerce to the Consumption Expenditures component of a GDP that also is composed of Gross Investment (primarily business spending but also residential housing), Government Spending and Exports minus Imports. Since Consumption Expenditures accounts for close to a whopping 70% of the GDP, online spending is becoming an increasingly crucial barometer of our economic well-being.

Below, you can see that U.S. e-commerce revenue is steadily rising:

But as always, it is not only about demand. Starting with Sweden’s url and France’s shipping charge, there are many stories that show the real side of supply.

My sources and more: For an overview of world shopping preferences, this PwC report has the data. Although they say a lot about how people shop, we need to read onward to see why. For Sweden, you can get more insight here, here and here. Meanwhile, there is more about Amazon Prime, here. And finally, this story about return problems in India again display the real part of the supply side.

Please note that several sentences in this post were published in a past econlife blog.