Cows don’t like the switch to daylight saving time.

A California organic dairy farmer said he enjoys the extra hour of light that starts in March. But his cows don’t. Because they are accustomed to a 2:00 a.m. milking regimen, an hour’s change is unsettling. The farmer said the November “fall back” was especially tough because they have to hold the milk for an extra hour.

The farmer and his cows take us to a Massachusetts legislative report on changing time zones. They too like the idea of sticking with daylight saving time for the entire year.

A Massachusetts commission just said it could make sense for Massachusetts to switch to the Atlantic Time Zone. After they “spring forward” an hour during March and get more daylight in the evening, they would remain there. However, New York and the rest of New England would have to do it too.

The graphic below shows that Massachusetts would join the blue areas in the time zone to the east: 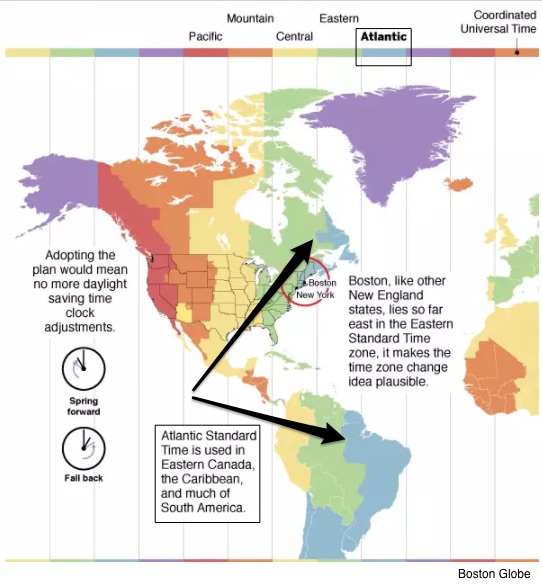 So, if the rest of New England does it too, we wind up with five time zones: 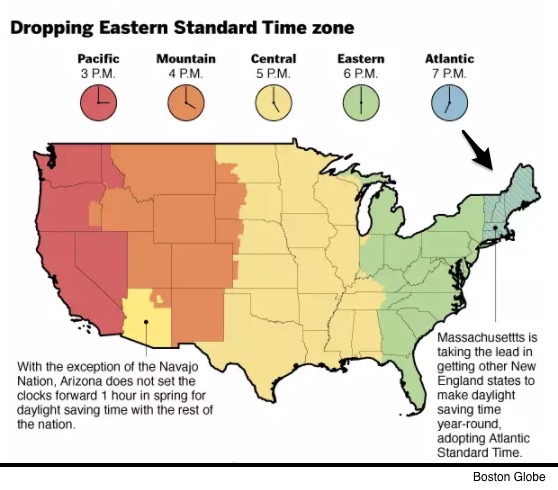 This graphic gives us some idea of the yearly cycle of daylight hours in Boston. You can see that a December sunset is close to 4 pm. (The x-axis is a January to January calendar and the y-axis is time): 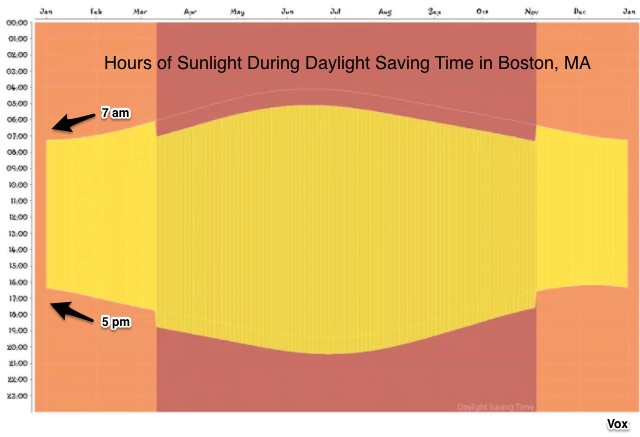 In their preliminary draft report whose final version will go to legislators, the Massachusetts commission considered the economic and health impact of the time zone change. One negative is more darkness when kids go to school. But retailers like the idea because Atlantic Standard Time creates more daylight for winter shopping after work. Proponents also point out that losing an hour in March has temporarily increased auto accidents and diminished sleep time.

Called transaction costs, the hassles that complicate the process of signing a contract or arranging a purchase diminish economic efficiency. My perfect example is the transaction cost of listening to the same voicemail every time I make certain phone calls.

But the cows in the new zone would be happier.

My sources and more: There has always been a slew of articles on retaining DST. I did though find Vox especially helpful for the overview and then WSJ and WPRI for the Massachusetts update. However, my favorite was on cows. But, if you are really interested in U.S. time, your best source is Keeping Watch: A History of American Time.

Please note that several sentences in this post were published in a past econlife.

Clarence the Tortoise and the Metric Mixup