What Amazon Wants For Its HQ2

Our story starts with one of the transistor’s inventors. According to a Wired article, William Shockley is the reason that Silicon Valley grows chips instead of apricots. Although Shockley Semiconductor failed, its employees created a local diaspora of techies.

Similar to Silicon Valley, a declining Seattle reinvented itself after Bill Gates, Paul Allen, and Microsoft arrived. As the origin of Seattle’s tech network, Microsoft attracted firms like Amazon.

And now, with Amazon announcing plans for an HQ2, the question is where?

We can assume that Amazon needs a techie location.

As a place where Amazon will generate ideas, its second home requires a knowledgeable labor force. That could mean a nearby university and the people who innovate, who design software, who think about what not yet exists. Amazon surely wants somewhere that, as one economist said, “Being around smart people makes us even smarter…”

That same economist, Enrico Moretti, tells us that technology is divergent and convergent. The divergent part relates to the have-nots, to the cities without the knowhow that Amazon needs. Meanwhile, the firms that employ a well-educated pool of highly paid workers will gravitate to wherever they are located. And that takes them to just a handful of U.S. cities where the people with technology converge. The result? “Strong regions get stronger.”

Regions with a technology concentration: 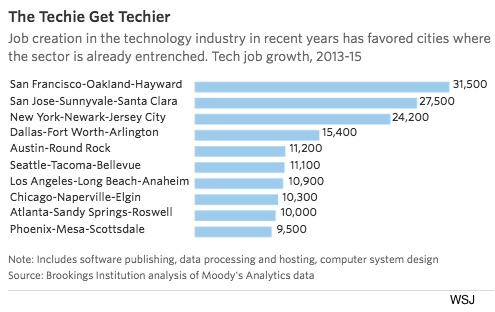 And, for a slightly different list of the top metropolitan areas with tech jobs: 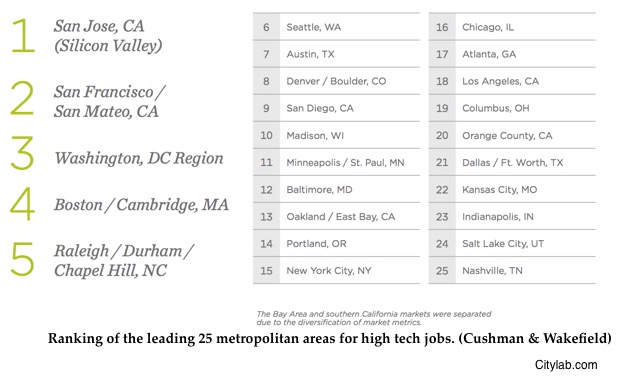 Amazon has asked for cities and regional economic development organizations to submit proposals. Rather precise, the process requires mailing five hard copies and submitting one electronically. All have to arrive in Seattle by October 19.

In eight pages of instructions, Amazon says it could create (a whopping) 50,000 full time jobs. The pay? Exceeding $100,000 a job. The jobs? Primarily in management, software development, and finance.

Amazon also notes that it prefers a metropolitan area with more than one million people. It wants locations “with the potential to attract and retain strong technical talent.” And they could need 8 million square feet of office space.

Amazon’s HQ2 is the perfect example of the factors of production they require to produce their services. At 8 million square feet of office space, the land requirement is massive. As for physical capital (tools, equipment, buildings), this is just one detail from their proposal’s instructions:

But the most crucial part is the human capital network with the technical knowhow.

My sources and more: Once you start to look, articles on Amazon’s new HQ2 are everywhere. But my starting points were WSJ journalist Greg Ip’s “Capital Account” and the Atlantic’s  City Lab. Then, for more of an academic perspective, I recommend this excellent Brookings article on tech networks. However, if your time is limited, do go to the Amazon proposal form. Their needs are mind boggling.