Tax dollars appear to be one reason that more states are legalizing recreational marijuana.

The next step after the yes vote was tax policy. Those eight states had to figure where that new stream of tax dollars would be collected. The possibilities were the growers, processors and retailers.

The Impact of a Tax Switch

Happily for researchers, the state of Washington switched its marijuana tax policy. The result was a data bonanza that let scholars identify new and old marijuana tax incentives.

At first in Washington state, a 25% tax had to be paid for every marijuana transaction. That meant growers, processors and retailers each paid a 25% tax as the pot passed through the supply chain. The last point of collection was at the cash register when the marijuana was sold to you and me.

Those supply chain taxes created the incentive to vertically integrate production. After all, if one firm grew and processed the pot, then it paid the tax once instead of twice. Because it was illegal for retailers to join them, only the growers and processors combined. The result was that 94% of all wholesale transactions came from a vertically integrated supply chain.

On July 1, 2015, a new law eliminated the old system. Replacing the “gross receipts” tax, the state said a 37% tax would be paid by consumers at the point of sale. Yes, buyers saw their marijuana tax increase from 25% to 37%. But at 2.1%, the price increase was much less. Still though, consumers started buying lower quality, less expensive marijuana.

Washington’s changes provide a tax policy lesson to other states.

On the supply side, states should be aware that Washington’s growers and cultivators diminished their vertical implication after the switch. Their response suggests that less vertical integration is more efficient.

On the demand side, we could look at a Laffer Curve. A Laffer Curve traditionally was used as a rationale for lower income tax rates. The idea was that higher rates create the incentive to work less and thereby lowered tax revenue.

With a sales tax, we have the same idea. For Washington, that 37% rate could be the point after which sales drop and tax revenue diminishes: 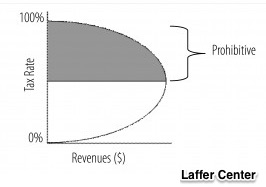 That does mean though that states with a lower tax rate, like California (15%), Maine (10%), Nevada (15%) and especially Massachusetts (3.75%) could generate more revenue.

So, if voters said yes because of tax revenue, they can learn from the state of Washington.

My sources and more: There is no better starting point for insight on incentives created by marijuana tax revenue than this paper. Then, for a summary of marijuana taxes, the Tax Foundation is a handy destination.