The Surprising Impact of Seeing Red

During the 2004 Olympics, when athletes in four combat sports were randomly assigned red or blue outfits, those in red won more frequently.

Where are we going? To how red affects us.

The Impact of the Color Red

Psychologists and economists have been looking at how colors influence our decision-making. Studying restaurant behavior, they concluded that waitresses who wear red get more tips while at bars, women with red lipstick are approached by more males. Delaying traffic with a red car, they observed that the impatient honks started sooner than with non-red cars. And, to all of this, we can add angry red-faced people, red sirens and red stop signs.

You get it–red influences us.

Wondering whether that influence extends to our financial decisions, researchers have devised dollar-related experiments. In one study, they presented participants with varying degrees of risk. For each one, the facts were the same. But the color of their instructions was not. One group read all in black, a second group got black and red, and the third, entirely blue as a control.

They were given pairs of choices like this one:

Those given the red print displayed more risk avoidance than the others: 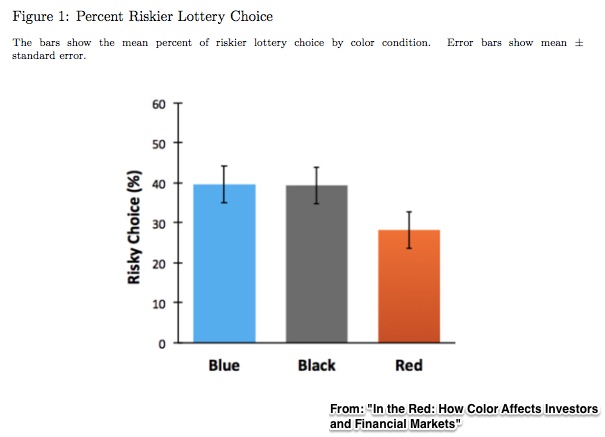 Similarly, offered a red chart of past stock prices, study participants said the downward trend would continue. But those receiving the data in black were more optimistic about the future. Finally, they asked colorblind people to make some of the same decisions. Like they expected, the results were the same for all sets of directions, whether red or not.

As for why, researchers appear to believe it is both nature and nurture. But we have to note one other phenomenon…

Our Bottom Line: the Priming Effect

As a phenomenon that precedes a decision, priming nudges us to think a certain way. In Daniel Kahneman’s bestseller, Thinking Fast and Slow, the people who watched a wheel of fortune stopping at a low number later named smaller numbers when asked an unrelated quantitative question.

Similarly, seeing red before making a financial decision can make certain individuals more risk averse. It can tilt them toward the safe alternative.

Our bottom line though takes us beyond investing. If the results of the red studies are accurate, then we can use the priming power of color to shape other financial behaviors. Also, we can encourage our favorite teams to wear red?

My sources and more: Always insightful, WSJ journalist Jason Zweig looked at behavioral economics yesterday. I was delighted that he provided a link to the academic research on investing and color. From there I did discover more in this Scientific American article and research at Cornell indicating we eat less on red plates if the food is a different color. And finally, again, I recommend Nudge.

What Most of Us Don't Know About the G20