Let’s start today with one big infrastructure project and one little one.

Our goal is to take a look at the Hiding Hand.

Having neared the end of its life span at 50+ years, New York’s Tappan Zee Bridge was due for a replacement. While the Federal Highway Administration called it “functionally obsolete,” it was not unsafe. The lanes were just too narrow and its traffic load too large. And there were some holes in its deck panels through which you could see the water. But the state fixed those.

In 2013, building began on a new structure that was positioned next to the old one. The estimated cost was $3.8 billion and the finish time, close to four years. Today we can say that the dollar and time estimates for New York’s new 3-mile long Tappan Zee Bridge were remarkably accurate. The price is now at $3.9 billion and the opening date for the westbound half could be this summer.

This is the Hudson River and the old Tappan Zee Bridge. Manhattan is just 30 miles  to the south: 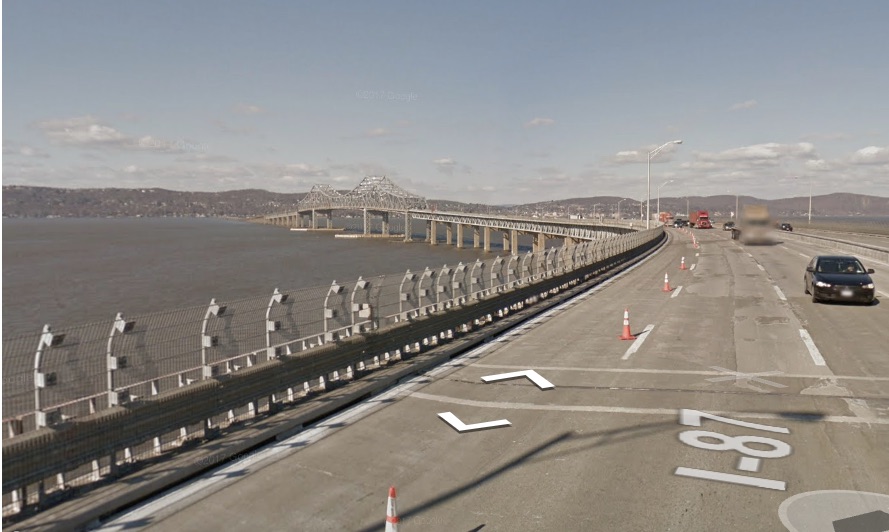 There is one problem. No one quite knows how to pay for the new bridge. New York State has borrowed $1.6 billion from the federal government, sold $3.6 billion in bonds, and expects to cover some of the balance with tolls. It also is doing some revenue shifting from other agencies.

Meanwhile, near my school in Summit, NJ, a bridge project was stalled for months. Completed in 1905 and somewhat crumbly, the Morris Avenue Bridge that crosses N.J. Transit tracks was deteriorating so the state decided to replace it. Work began and then stopped because the funds ran out. Months of detoured traffic continued until New Jersey increased its gasoline tax. Now, work has resumed.

The new Morris Avenue Bridge is supposed to cost $6.8 million. The infrastructure project that started during August 2015 and was supposed to last 18 months will probably be completed during the beginning of 2018.

You can see that infrastructure is never as simple as it sounds…and there is still more.

Our Bottom Line: The Hiding Hand

In 1967, Albert O. Hirschman introduced us to the Hiding Hand. While as benevolent as Adam Smith’s invisible hand, the Hirschman hand focused only on infrastructure. At first he said, the plans for infrastructure projects were too rosy. Focusing solely on 11 projects in developing nations, he saw high hopes from planners that would be tough to implement. Then though, a “benevolent hiding hand” encouraged the ingenuity and effort that the project required. And, it all worked out.

A group of scholars, however, believes  Hirschman was wrong. Looking at eight project types in 104 countries, they concluded that the Hidden Hand was malevolent. You can see below that cost exceeds benefit for most projects: 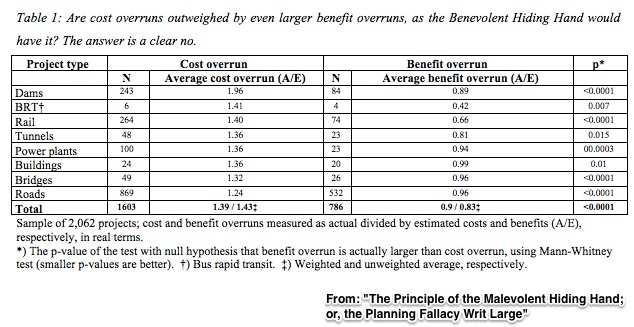 So, where are we?

Having just “celebrated” infrastructure week with an brief policy statement from President Trump, we can conclude with the coast of England. Although it looks smooth from afar, the closer you look, the more you see all of the inlets and curves and rocks.

So too for our infrastructure planning.

My sources and more: The perfect source for the Tappan Zee project, this Lohud article said it all. Then, I just needed to read the paper that challenged Hirschman’s results, and I had the whole picture. You might also enjoy, as did I, these Econtalk hour-long interviews, here and here on infrastructure issues.

The Mystery of the Footlong Sandwich's Missing Inch