After hiking the Appalachian Trail in record time, ultra-marathon runner Scott Jurek was cheered by friends, family and a film crew. At the top of Maine’s Mount Katahdin, they popped open a bottle of Champagne and celebrated his 46 day 8 hour 7 minute run.

But then armed park rangers fined him for littering, gathering in a group that exceeded 12 people and drinking alcohol.

Jurek had violated Baxter State Park’s rules. The man who long ago had donated the land and funded its upkeep said no drinking and no crowds. His goal was to preserve a pristine wilderness.

Where are we going? To similar problems at our National Parks.

There were 330 million visits to our National Parks in 2016. At Utah’s Zion National Park, close to four million people hiked a 6-mile canyon stretch from March to November. Just traveling by shuttle to the park’s visitors’ center could mean waiting in a line of 300 people.

You can see that the National Parks people have a dilemma. They want more of us to enjoy the wilderness. However, when we all show up at the same time, we destroy the experience.

These are the overcrowding stats: 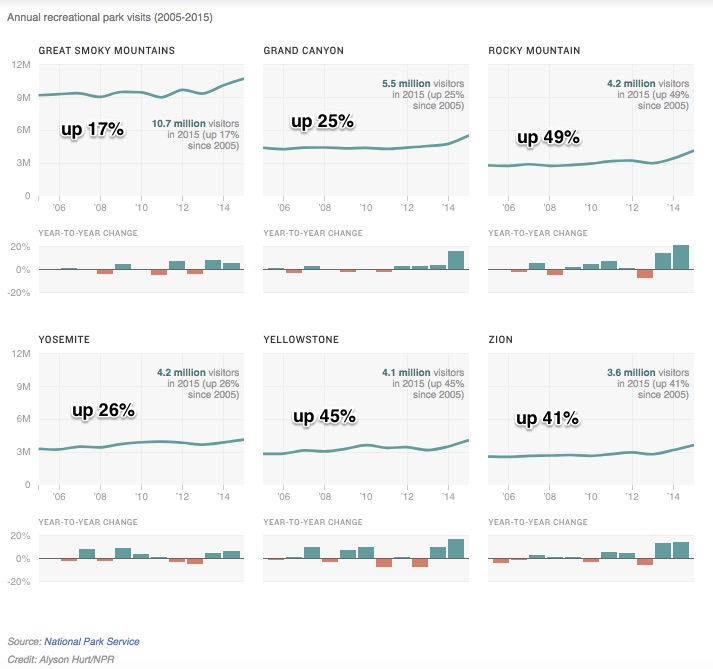 An economist might say that if the overcrowding problem is caused by the low cost of visiting a national park, we just need to make it more expensive.

Knowing that the economic definition of cost is sacrifice, long lines, a reservation system or phasing car entry could increase the campers’ and hikers’ cost. Entry caps and fewer parking spaces are also possibilities.

Least acceptable but perhaps most effective would be a price hike. You can see below that entry fees are minimal:

Raising prices, you get a more inelastic supply curve that has moved upward and to the left. The result? Much less quantity demanded: 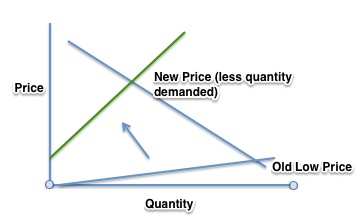 Returning to where we began, Baxter State Park will have the easiest time controlling crowds. But is the (non-price) cost too high?

My sources and more: Thanks to the Outside/In podcast for alerting me to Scott Jurek’s fines and the National Parks dilemma. For more on the story, I would also recommend this Seattle Times article  and the unique history of Baxter State Park. Most crucially though, the economics of the story is in Medium, these stats on park visits, and this NPR story on overcrowding.