In Japan, there are more diapers for adults than babies.

Meanwhile, retailers have slowed down their escalators. And kitchen appliance makers are making them shorter because, after shrinking a bit, an average Japanese elderly woman is slightly under five feet tall.

Below, at a Tokyo fashion show, males and females were modeling diapers: 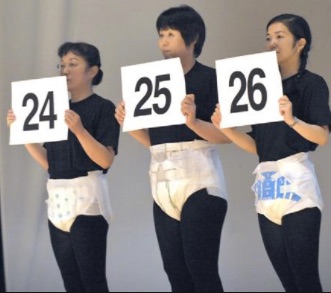 So yes, the economy is responding to Japan’s aging population.

Totaling close to one-third of the population, Japan’s 60 plus cohort is doing close to one-half of all consumer spending. While other age groups are saving, Japan’s older individuals are enjoying their social activities, their travel, and their home renovations. Predictably, their medical outlays are also up.

Bloomberg calls them the silver spenders:

However, because of an increasingly dominant aging population, Japan is feeling demographic stress.  The cause? A “baby famine,” living longer, and minimal immigration. Far less than the 2.1 replacement rate, Japan’s birth rate is 1.4. The average Japanese women lives to 86.6 and immigration remains low.

So yes, those elderly individuals are fueling the GDP. But also, they are receiving an income transfer from the working population.

My sources and more: Ranging from a Goldman Sachs note to Claudia Goldin‘s papers, the analysis of Japan’s demographic stress is fascinating. I also enjoyed contemplating the connection between economic development and fertility in this paper. And finally, for the facts that made it all real, Bloomberg discussed Japan’s seniors’ spending while marketplace.org focused on the diapers.