The Magic of the MetroCard

Replacing the subway token, the MetroCard made NYC subways cost so much less.

No, not in dollars.

It was the transaction cost that went way down.

What the MetroCard Changed

Introduced in 1997, the MetroCard was a versatile piece of plastic. Riders could buy monthly or weekly unlimited trips. With $1.50 the price of a single ride, you just needed 42 to make the monthly worthwhile. And you could affordably commute from an outer borough because the card’s free transfers among subways and buses compressed multiple fare zones into one.

Meanwhile, the ubiquitous subway token soon disappeared. Whether storing them at home, keeping them in your pocket, or sharing them with your kids, they required effort. Buying them even involved time and energy.

Very different. those MetroCards could easily be shared and slid into your wallet. They were so user friendly that just after their first year, rides increased by 137 million. Only two years later, the number rose by another 181 million. In 1975, the Queens subway station with the largest ridership reported 6.8 million total riders. By 2015, that number had skyrocketed to 17.22 million.

I know we should add that ridership also increased because the subway had become much safer and cleaner  But still, as you can see below, the MetroCard made a huge difference: 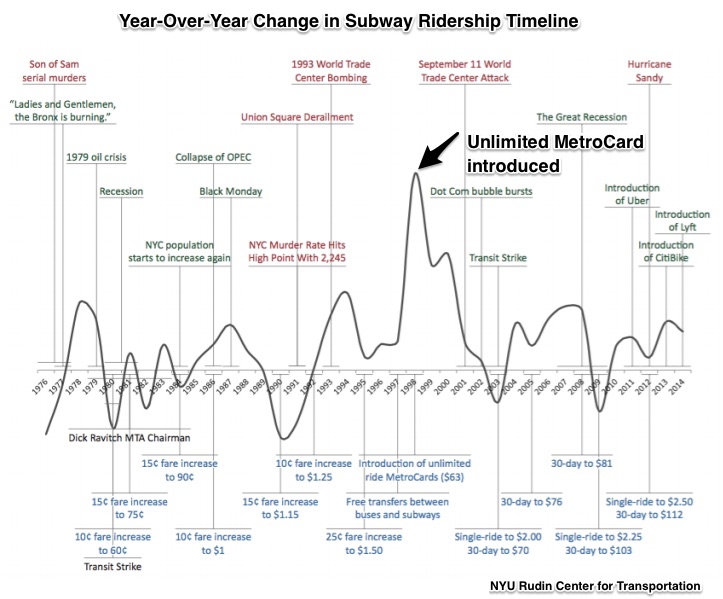 The MetroCard empowered its users. They could decide when and how to use it throughout NYC’s five boroughs. Using a single ride as a reference point, they could save money with the unlimited 7- or 30-day card.

The MetroCard (like the E-ZPass) is our perfect example of a device that lowers transaction costs. Defined as the time, energy and effort it takes to complete a task, a transaction cost can include repeatedly listening to a phone menu, standing in a long queue, or completing a multi-page job application.

As transaction costs decrease, we have more of an incentive make the phone call, stand in line, and apply for the job. However, having made travel so much easier, the MetroCard’s magic was unusually potent.

My sources and more: Hearing yesterday’s WNYC report on subway ridership in NYC, I realized the wonder of the MetroCard. From there, it was fascinating to learn more from the NYU study and this summary.

Why the U.S. Government Cares About a Snuggie

What Matt Damon Can Teach Us About Chinese FDI