Where To Find China’s Missing Women

During an interview in 1996, a Chinese farmer referred to one of his three children as “the nonextistent one.” He was referring to a daughter whose birth he kept secret because of China’s one-child policy.

Where are we going? To marriage markets.

In China son preference has been the norm. Skewed by selective abortion and infanticide, sex ratios at birth in China for 2010-2015 were close to 116 men for every 100 women. If we include neglect after birth, there might even be 66 million “missing women” in China.

As usual, the statistics are not quite as pristine as they sound. Comparing births in 1990 and the population 20 years later, two researchers uncovered a discrepancy. They found four million extra male and female 20-year olds. And in that total there were one million more women.

The numbers corroborated their observations at the village level. Speaking with government officials, they found female births were unreported. To preserve village stability, those officials had ignored the births.

The researchers said those unreported births were a widespread phenomenon. Uncoordinated, the incentive was universal. It was better to let farmers make their own family decisions.

In China’s marriage markets, the conventional wisdom says that there would be a male glut and female shortfall because of one-child. As a result, the supply of women is much less than the demand from men. In the following graph, the segment of the demand curve that is below equilibrium will not marry: 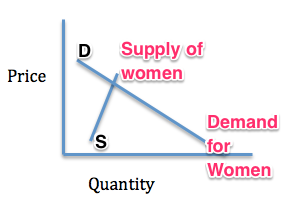 But, if the new research is accurate, then that female supply line might be longer.

My sources and more: Always good for a springboard, this Washington Post article introduces the missing women story. Adding this University of Kansas press release and  this paper, we can see most of the story. To complete it, we need this paper about Gary Becker.

Please note that several sentences from this post were published in a previous econlife entry.

There's Lots More To the CPI Than One Number