The Problem With Hitting the Debt Ceiling Again

So who has close to $18 trillion in government securities?

Actually, we do. We owe approximately two-thirds of the debt to ourselves. The U.S. government lends to itself, for example, when the Social Security trust fund swaps its cash for bonds. In addition, individuals, businesses, state governments, local governments, pension funds–the list is long–buy U.S. Treasury securities.

The rest of the U.S. debt is held by foreign governments, businesses and citizens, with China and then Japan at the top of the list. Next is Belgium (surprising), Caribbean Banking Centers, Oil Exporters, Brazil and then a long list with Uruguay at the bottom for December 2014.

We have a debt ceiling because of a 1917 law. At the time, the Congress decided it was losing control of the volume of borrowing. To regain power over the federal purse and fiscal policy, they said, “We will decide the maximum amount the U.S. can borrow.” And, from that day onward, whenever necessary, they voted to raise the debt ceiling.

And that takes us to February 2014. Having hit the debt ceiling, lawmakers decided on a new approach. Rather than selecting an amount, they avoided a political showdown by creating what they called an “extension.” Actually a sliding ceiling that would move upward, the extension stopped its ascent yesterday, March 15, 2015. The new debt ceiling is whatever we owe this morning.

For that reason, Secretary of the Treasury Jack Lew sent a letter to House Speaker Boehner saying, “I respectfully ask the Congress to raise the debt limit as soon as possible.” Awaiting their action, he has temporarily stopped issuing some bonds. The Congressional Budget Office said that without a new debt ceiling we could run out of cash next fall.

If you are concerned with the size of the debt, it is helpful to compare it to the GDP–sort of like deciding whether your mortgage is too big by comparing it to your income. When the debt and the GDP are equal, many people become concerned. 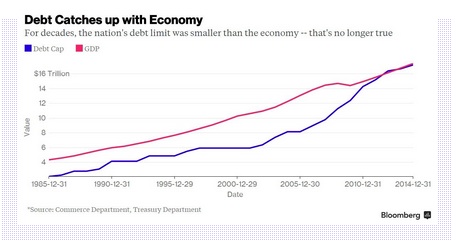 The Reason This Winter Was Not So Bad