The Surprising Reason Your Car Was Made in Mexico

Alabama though has a problem.

The Allure of Free Trade

Mexico is attracting a growing number of auto factories. This map says why:

With more than 40 free trade agreements, Mexico can say to car makers,  “We will save you money.” For BMW, that would mean avoiding a $5,000 duty on a $50,000 car sent from Spartanburg, South Carolina to Europe. By contrast, that 10 percent duty for U.S. made cars is zero for Mexico.

As a result, car manufacturers are building new factories in Mexico while in the U.S. they prefer to expand what already exists. Yes, Spartanburg will enjoy a $1 billion investment as BMW expands its sport utility plant there.  But for a new plant, BMW chose Mexico.

So, for Mexico, think cheaper labor, improving logistics and free trade to explain why Mexico is attracting auto investment from Nissan, Honda, Mazda, Audi, and Mercedes. Add to that a NAFTA (North American Free Trade Agreement) perk that any car made with more than 62.5 percent parts and labor from North America can ship tariff free to anywhere in North America. 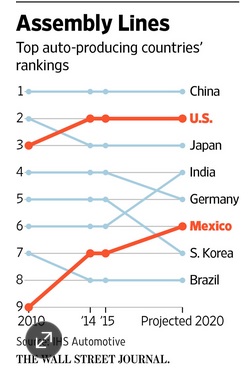 Nineteenth century economist David Ricardo (1772-1823) would have given Mexican free trade policy a high five. One of the first people to explain the principle of comparative advantage, he said, “Trade, trade, trade,” because each nation then can do what it does best (where it has the comparative advantage) and the whole world benefits through greater efficiency.

How Temptation Bundling Can Help You Exercise More