The Reason It Can Be Tough to Cross the Street

To access Guilford in the East Baltimore area of Maryland, just walk north on the west side of Greenmount and make a left. Driving, though, you would find it tough to turn into the community because most of the streets are one-way, in the wrong direction. And once you did discover an entry point, you would soon be on narrow, winding roads that snaked unpredictably. To park, a permit is required.

On the other hand, Waverly borders Greenmount to the east. As a neighborhood, Waverly is based on a grid. Driving north on Greenmount, to access Waverly on the right, you can identify 37th Street, 38th Street and so on. It is easy to enter the community.

Asked whether a home on Waverly’s 37th Street is more pricey than one on Guilford’s Cold Spring Lane, with no research, executives from Zillow would point out that numbers imply less affluence than names. In a recent NY Times column, Zillow executives added that if the residence is on a “lane” rather than a “street” or a “road,” the odds are higher that you are in a wealthier community.

Where are we going? How easy is it to cross the street from Waverly to Guilford?

One paper from Harvard and UC Berkeley suggests that in the U.S., your income mobility depends on where you live. After dividing the entire U.S. into “commuting zones,” (CZs) each composed of approximately four counties and 380,000 people, researchers compared intergenerational mobility. They asked, for example, where it was most likely for a child in the lowest income quintile to become an adult in the highest income quintile. 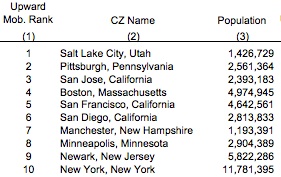 By contrast, the least mobility in the top 50 CZs was here:

Because mobility depends on where you live, it can be a local policy concern. And, as for making the leap from Waverly to Guilford, in the top 50 list, the Baltimore region is #37. So crossing Greenmount could be tough.

How To Keep Your Parking Spot After a Snow Storm