With Germany the successful sibling, Greece, the “black sheep” and everyone irritated over something, they still stick together. Maybe the European Union is like a dysfunctional family.

Here are their opinions of each other: 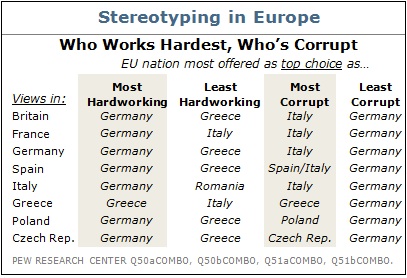 And some have a better self-image than others: 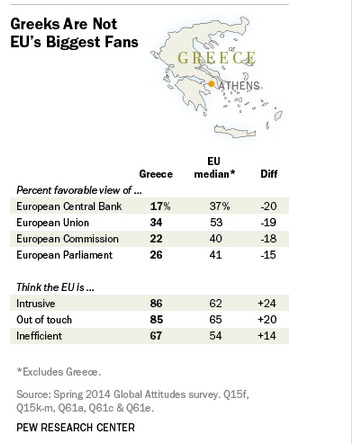 And Germany is up: 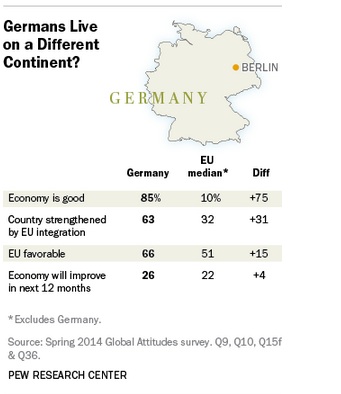 But, overall, EU members believe some good things about their union.

And finally, like a dysfunctional family, as with Lithuania’s eurozone entry, we see that certain members grow closer. However others, like Greece, always seem ready to leave but never do.

In our final graph, Eurobarometer tells us that members like their freedom to study, work and travel throughout the EU. More than two centuries ago, David Ricardo explained how they benefit from that freedom.

As the first economist to explain comparative advantage, David Ricardo understood the synergies of trade. He told us that it does not matter if you are not the best at making something. You just should produce whatever requires the least sacrifice. If it’s 5 widgets or 10 gidgets with the same resources, then make those gidgets and export them to someone who can make widgets with fewer resources.

Here, the EU enters the picture. A bigger market through which people, goods and services can easily move facilitates wealth creation. That bigger market feeds the economies of scale, specialization and comparative advantage that David Ricardo described.

And that is why the European Union and the eurozone make sense and our dysfunctional family stays together.

What Happens When People Pollinate Better Than Bees?