What Happens When People Pollinate Better Than Bees?

During the mid-1990s, the apple growing region of Central China near Chengdu suddenly lost its bees. The reason might have been pesticides or over-harvesting honey. No one knew.

What we can say for sure is that no more bees meant no more pollination and the apple crop would decline. Yes?

It did not work out that way.

Without the bees, the farmers needed human labor. Using chopsticks with chicken feathers, they worked when it was cold and rainy, they worked steadily, they rarely skipped a tree. Because bees are neither thorough nor consistent, people increased apple output by 30 to 40 percent. In addition, the labor that was paid helped local business and when neighbors supported each other, a communal spirit developed.

Where are we going? The price of the bees’ replacements lets us determine the value of an ecosystem.

How Can We Price an Ecosystem?

In “Changes in the Value of the World’s Ecosystems,” a group of scholars estimated the value of our natural capital. 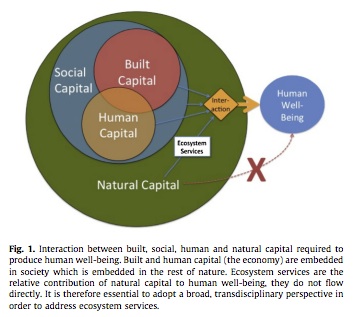 The tricky part, though, is giving a dollar value to a non-market commodity. Below, you can see some techniques.

The next step was to get totals for coral reefs, open oceans and other ecosystems. Their estimated total for the world was close to $142 trillion.

The researchers who created ecosystem price tags had a specific audience in mind. Aware of the ethically motivated group that considered the environment priceless, they targeted a second group who needed a price tag to see the value of preserving natural capital. To both groups they were conveying the timeless reminder that natural resources are finite (and may be impossible to price).

And that returns us to the Reverend Malthus.

Explained by Bill Bryson, 18th and 19th century rectors and vicars tended to be affluent and bored. Their preparation typically was a university degree in any area with rather generous rents and tithes funding their pay. Minimally prepared to give human sustenance, they had considerable time on their hands.

What to do? The Reverend Thomas Malthus (1766-1834) thought and wrote about economics and the future of the world. Perhaps one of the first environmentalists, Reverend Malthus told us in 1798 that population grows geometrically while resource production expands arithmetically.

As a result, whether looking at bees or coral reefs, communities are perpetually coping with the threat of resource depletion.