The Facts Behind the Gender Pay Gap

Located in Northeast India, the Khasi is a matrilineal society numbering close to 1 million (2011). From birth, women experience a female world. Their households are led by females, businesses are run by women, property can be inherited only by women. When University of Chicago researchers quantified male and female tendencies to compete, the Khasi women got the top grades.

In a Khasi maternity ward, you might hear cheering when a girl is born and, “‘oh okay, he’ll do” for a boy.

Or, if you visit a Khasi home…

“When we visited the Khasi household of a youngest daughter, if a man (obviously the husband) came first to greet us, he always said ‘please wait, my wife (or mother-in-law) is coming.’ And it was the wife who entertained us…while her husband remained in the corner of the room, or in the next room.”

Still close to a 78% average, the U.S. gender pay gap is not quite as wide as it first appears. But 78% does mean that a woman with median earnings has to work three more months than a man to have the same yearly pay. 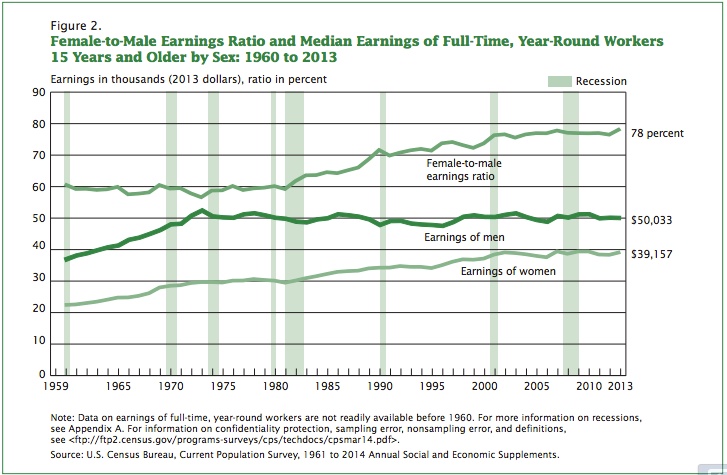 However, a 78% ratio could be misleading because of the baby boomers. With a disproportionately high number of baby boomer ladies and the pay gap widening with age, the oldest female boomers skew the statistic.

The picture also changes when we remember that women work fewer hours than men. 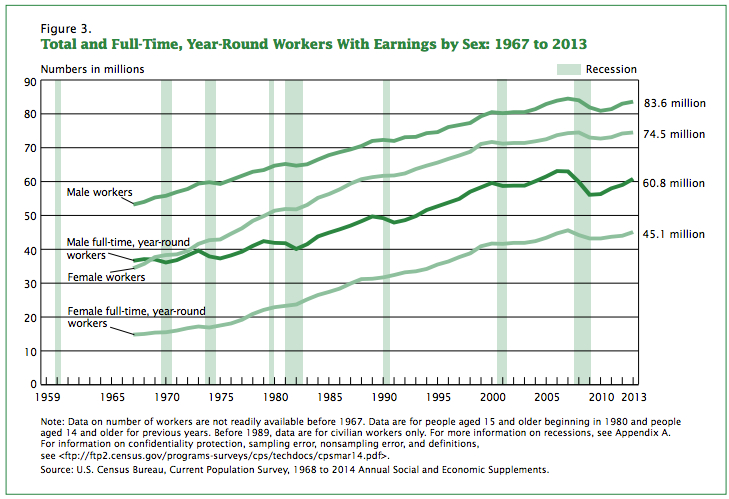 Consequently, although aggregate wages differ, on an hourly basis of 16 cents for every dollar (from Pew, below), the gap shrinks. And, it gets even smaller when we look at hourly wages for women and men with similar characteristics. Then, the gap is close to five cents (2010 data) for every dollar. 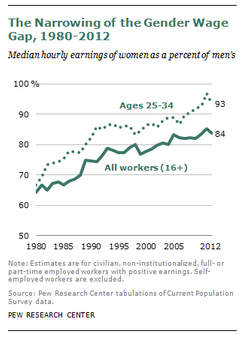 Another consideration is the pay package. Because women tend to accept less pay in exchange for family friendly fringes like paid sick leave when caring for children, their wage may be less than a male counterpart’s but not their whole pay package. In one study, economists estimated the gap was close to 3.6 cents after including benefits.

Also, we should consider the payoff from college majors. Among the top ten such as petroleum, aerospace and mechanical engineering, men dominate in nine. Perhaps predictably, those that yield the lower pay, including social work and early childhood education, are primarily populated by women.

And, we could look at state-by state differences and have to be aware of the years and the age groups to which the data apply. So, you can see that we are having a Benoit Mandelbrot moment. As the fractal mathematician said when looking at the British coastline, the closer you look, the more detail you see.

The Bottom Line and the Khasi

But, ending where we began, the Khasi take me to a constant. Although we can attribute a gender pay gap to the law or the workplace or college, I suspect we are really talking about changing an attitude that starts with the family. Even for the millennials who seem to be closing the gap, Pew points out that fathers are one-third as likely as mothers to say that being a parent has harmed their chances for advancement.

Weekly Roundup: From Milkmen to Menus