You can see below that .349 was Derek Jeter’s career high with the Yankees. 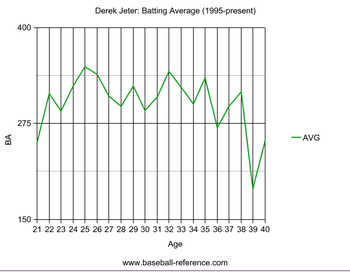 The most valuable baseball players (although Jeter was never an MVP) are typically younger than 30 and rarely over 35. Office workers and salespeople tend to be most productive in their early to mid-40s. Most Nobel prize winners in physics and chemistry did their innovative work before they were 50. Academic studies even imply that businesses with younger workers have a higher return on their assets.

Where are we going? Wake Forest professor Robert Whaples tells us that we have more to worry about than soaring health care spending and Social Security programs. An aging population could diminish innovation.

And that takes us to the 75 million baby boomers who buoyed home ownership, consumer spending and the size of the labor force. Now though, with the oldest baby boomers at 68 years old, approximately 10,000 Americans are retiring each day. As you might expect, retirees spend less than when they were younger and depend more on their children and government. While they boosted labor force participation rates to new highs during the 1990s, their departure from active employment is having a reverse impact.

Baby boomers will balloon the number of people who depend on current workers. Called the dependency ratio, it just refers to the retirees who will depend on current workers’ tax dollars for their Medicare, Medicaid and Social Security checks. Returning to Dr. Whaples point, we will also have a smaller proportion of our population who are most creative. 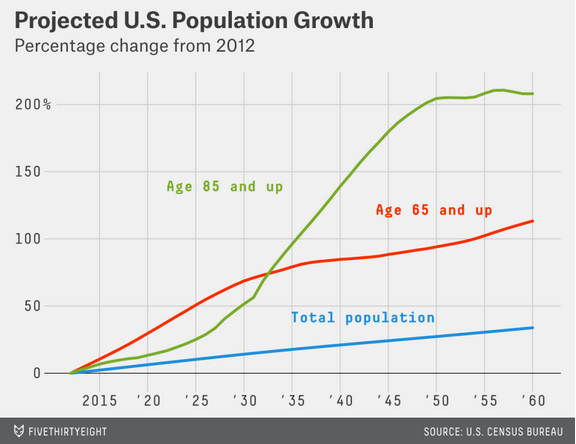 Our Bottom Line and Economic Growth

Economic growth will be constrained if an older population means a less creative population. There is some good news, though — at least temporarily. Since the millennials (born 1981-1996) have surpassed the baby boomers as the largest population cohort, by 2030, they will have inflated the labor force enough to compensate for their boomer parents’ innovative decline. But then these “echo boomers” will start to retire and the whole cycle again becomes alarming.

The Facts Behind the Gender Pay Gap

My Two Cents About Pennies