The 6-ounce bottle of Coke was the king of soda when an upstart company called Pepsi-Cola sold a 12-ounce bottle for the same price. The year was 1934 and the price was 5 cents. Pepsi’s competitive strategy has been called brilliant because its biggest costs were advertising, bottling and distribution. For Pepsi, an extra 6 ounces did little to their cost but must have delighted consumers.
21 years later, Coca-Cola finally started selling 10- and 12-ounce “King-Size” bottles. McDonald’s though stuck with its 7-ounce Coke during the 1950s, offered a 16-ounce Coke in the 1960s and the 21-ounce size in 1974. Once “normal,” the 8-ounce serving has become a small or “mini” because of what we are used to.
The place we are going here is “the margin.” Cost and calories are a perfect way to see how firms and consumers think at the margin when they decide whether to add or subtract a little extra.
Below, you can see how the “margins” for soda size have monumentally changed:


With M&M’s, we can look at the margin slightly differently. When an NPR Planet Money reporter bought 2 single serving M&M’s packs, one regular and the other peanut butter, he wondered why they were both a dollar but the plain M&M’s weighed less. Assuming they were shaving some content as a cost-savings, he investigated. And yes, like Coke and Pepsi, Mars (M&M’s maker) also was thinking at the margin but here, it was the calories. If the Peanut Butter M&M’s had weighed more, their calorie count would have exceeded 250, a number that they thought was the consumer’s single serve maximum.
In the Greek yogurt world, the battle at the margin was also about calories. When Chobani’s competitors started selling a 5.3 ounce 100 calorie yogurt, Chobani soon had one too. Although they had gone done from a higher calorie 6-ounce container, they did not lower the price with the smaller alternative.
Our bottom line? Economists like to point out that decisions usually occur at the margin where, based on cost and benefit, consumers and businesses make decisions about a little more or a little less.
Finally, I loved this chart of hamburger calories from WSJ. It too is all about thinking at the margin. 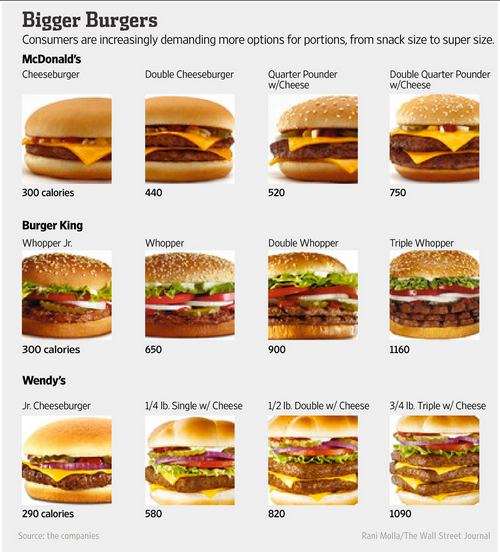 California's Proposition 8 Was Also About Economics