One Giant Leek For Mankind

At a giant vegetable competition, Paul Rochester’ won the world record with his 21 pound 8 ounce leek.

It did not work out as well for a giant potato.

Sadly, scientists recently concluded that a giant potato named Dug was not a potato. Instead, DNA analysis indicated it is probably a gourd.

Donna Craig-Brown is holding Dug. She and her husband own the garden where he accidentally discovered Dug with a hoe: 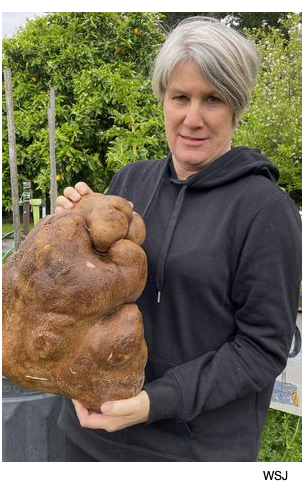 Responding like most of us after finding a giant potato in our backyard, the Craig-Browns contacted Guinness World Records. They were worried though that the “potato” could lose some of its 17.4 pounds from hoe punctures so they stashed it in their freezer and waited for a judgment. They said they were “gobsmacked” when they heard the Guinness decision.

The Guinness letter to the Craig-Browns expressed regret. “This has been a fascinating journey of discovery and we’re glad we’ve been able to get to the root—well, technically, tuber—of the matter. We wish the Craig-Browns all the best with their future horticultural endeavors.”

And yes, the Craig-Browns, from their home in New Zealand, said they would give it another try.

A legend in giant vegetable circles, Peter Glazebrook won the world record for his 18-pound onion in 2012: 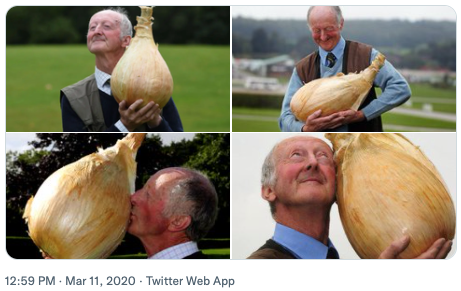 He also grew a 67 pound cabbage, a 4-foot leek, and a 60 pound cabbage. Below you can see Kevin Fortney, another giant veggie grower, with what appears to be two giant cabbages: 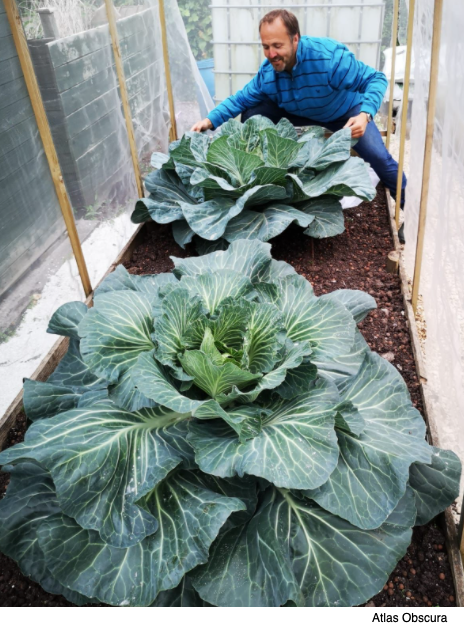 You may be wondering (as did I) if these vegetables taste good. Mr. Glazebrook says yes.

Our Bottom Line:  Thinking at the Margin

An economist might say that giant vegetable growing is all about the margin. Defined as where we add something extra, the margin can refer to a margin of victory (extra points), marginal revenue (extra sales dollars) or a margin of safety (longer airport runway).

Mr. Glazebrook tells us that he once won a heavy onion competition by a one ounce margin. Similarly, Mr. Fortney says a several ounce difference won him the zucchini contest and 90 grams extra got him the chili prize.

Where are we? Far beyond the world of giant vegetables, we are always weighing cost and benefit at the margin.

My sources and more: Thanks to yesterday’s WSJ for introducing me to the world of huge vegetables. From there, I discovered more detail at (the always interesting) Atlas Obscura. here and here.

And finally, this was the leek in our featured image.

Why We Worry About the World's Wheat