You may not want to bring home the bacon.

Last November, an agricultural economist from Purdue University told us that bacon prices were up from 30 to 40 percent since the beginning of the pandemic during March 2020. With the average American spending close to $7 a pound, the price is the highest since 1947: 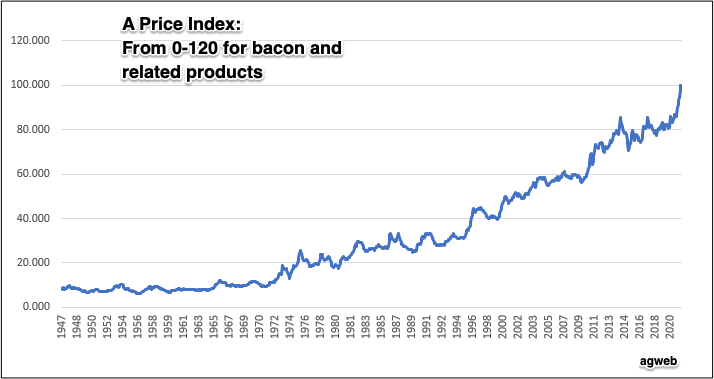 Bacon prices are soaring because of demand and supply. On the demand side, spending more time at home, we’ve consumed more bacon. Meanwhile, China also wants more as they build their hog herds. At the same time, pandemic-related feed, freight, labor, and livestock problems have elevated production and distribution costs.

So yes, bacon could affect your breakfast plans but that is only a part of the story.

We can expect a relatively tiny Florida orange crop of 44.5 million 90-pound boxes. Among the smallest crops since 1945, the number of oranges is way down. One big reason is a very small bug. Called citrus greening (or Huanglongbing), the devastation is exacerbating the decline in orange acreage. According to a Citrus Industry report, orange acreage is down almost 50 percent since 2000.

Reflecting the small crop, price increases are likely. And indeed, WSJ tells us that frozen concentrate OJ futures are up 50 percent since March 2020.

Our Bottom Line: Causes of Inflation

The first takes us to three reasons, to demand pull, cost push and one source. Occurring on the consumer side of the market, demand pull just says too many of us want the same goods and services. Just think, when everyone wants the same sweater, its price goes up. Next, our second cause, cost push, takes us to the production side of the market. It points to more expensive factors of production, to pricier land, labor, and capital. Lastly, one source means an item like oil is more expensive.

Alternatively, we can give our question a monetarist answer. The monetarists, led by economist Milton Friedman, had a simple answer. Inflation is a monetary phenomenon. Occurring when there is too much money circulating, inflation results from an imbalance between the money supply and the value of the goods and services we produce. We can even cite a formula: MV=PQ. The MV half is the money supply. It is the amount of money times its velocity (how many times the same dollar or other currency changes hands). Then, as price times the quantity of all that is produced, the PQ side might be described as the GDP. From here, we can conclude that MV will impact PQ. And finally, if you say that V is a constant (economists disagree about this), we have M, the money supply as the key variable that determines PQ.

Returning to bacon, demand pull and cost push have nudged the price skyward. But also we have the Federal Reserve’s low interest rates expanding the money supply. However we slice it, the price of bacon is up because of inflation.

My sources and more: Bloomberg had the inflation headlines while WSJ and the Citrus Industry detailed the orange crop’s problems. From there, if you really want to dig into the weeds, this 1975 article from the Fed explains the monetarist explanation of inflation. Much simpler, the NY Times gave the alternative explanations. But the best article I read was about bacon.

Where Dog Walking Takes Us