We recently saw that a fat male pigeon sits at the top of pigeon society.

The same could be true for humans.

Let’s start with the pigeons.

In a recent study,  U.K. and Australian scientists observed that heftier homing pigeons got the females and the food. Meanwhile, their diminutive brothers had to accept less. Because male dominance seemed to be based on size, scientists wanted to see what would happen if the little pigeons thought they were bigger.

Once they became 12 percent heavier because of weights stuck to their backs, the little guys acted like the big ones. (The birds were already familiar with the feeling of something on their backs.) Their aggression–“pecking, chasing, beak grab, neck pull and wing slap”–went up significantly.

Sort of like pigeon mass, tall men could be advantaged. At six feet or beyond, our recent presidents have been tall:

Now researchers also believe that weight is a marker of leadership. Through six different laboratory experiments, they concluded that heavier men were perceived as more persuasive. Then, from there, they took the leap to influential leadership.

First, looking back, researchers reminded us that a man’s weight signaled status in pre-industrial societies. The weight, they assumed, told the group that he was a successful hunter. Now, in a 2019 article, they asked if the same was true today. Wondering if a formidable physique conveyed a message about success and power, they said, “yes.” As long as the big people were not obese and not female, their size implied “influential leadership.”

In one study, participants associated larger men with the traits that we typically see in politicians: 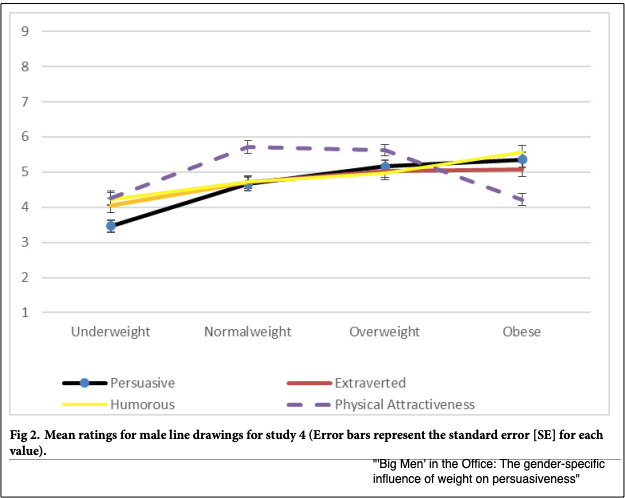 At this point, we need to ask about our expectations.

Behavioral economists tell us that what we expect before an event can determine what we see after it happens. In one university study, students that expected their rats to be smart only cited traits that displayed their rodents’ intelligence. In addition, handling the “smarter” animals more gently, they encouraged the elevated results.

I wonder if our expectations for larger men reflect some confirmation bias. Expecting certain behaviors, we create and incentivize them.

My sources and more: A Vicki Bogan interview was the perfect springboard for looking at big men and influence. From there, I went to the academic paper that she co-wrote and returned to a past econlife post (that I extensively excerpted today).

The Tangles in Our Supply Chain