Why Changing to Standard Time Is Tough

Last night, at 2 a.m. or so, an Amtrak train was sitting for an hour in a station.

Amtrak’s Crescent connects New York City and New Orleans. During what usually takes 31 hours and 47 minutes through 13 states, the trip would have been somewhat different last night because of the switch to Standard Time. Since we “fall back” an hour, Amtrak has a dilemma. The train will arrive at the next destination an hour early–but not really. To solve the problem, their overnight trains have to wait an hour at the nearest station. Only then does the time match the schedule.

The hour that we shift twice yearly between Daylight Saving Time and Standard Time has created countless adjustments.

But let’s begin with some history.

The search for more daylight has been around for a long time. In 1784, Benjamin Franklin explained (somewhat sarcastically) that more morning light would let us conserve candles. Having some fun in his 1784 essay, he also suggested that a tax on shutters might encourage people to awaken early. (As a night owl, I am horrified by thoughts of a world run by early risers.)

In the U.S., we have to look to 1918 when the Congress included a daylight saving time clause in time zone legislation. Hoping to move the clocks forward every May 31, instead they created a huge flap. On one side, farmers objected saying their cows could not be milked and their work could not begin in dark wet fields. At the same time, baseball team owners cheered that later games would boost attendance while the founder of Filene’s department store predicted that more women would shop after work.

In 1919, the Congress wound up rescinding daylight saving time and then went back and forth until the Uniform Time Act of 1966 and the Energy Policy Act of 2005 made it the law for (most of) the land. The problem though is that DST’s rationale relates to energy conservation–a conclusion that is probably inaccurate. Still nine states have voted for year round DST but they cannot proceed without Congressional approval. 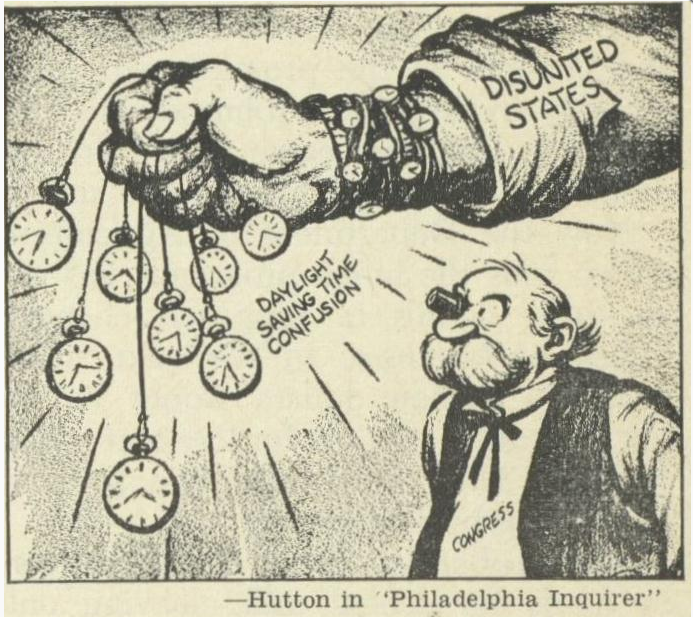 The daylight saving debate is about crime and our health. It takes us to our physiology, to what society has decided, and to the sun. It is also about the economy.

Daylight saving is good for us because crime rates diminish when there is more light at night. It could be bad for us because during the week after the time shift, there have been more emergency room visits, more accidents, strokes, and heart attacks. Furthermore, a recent study from economists at the University of Pittsburgh concludes that late sunset communities experience the sleep deprivation that diminishes health and productivity. However, we also have evidence that in the long run there are fewer pedestrian fatalities. Still other researchers point out that the commercial and recreational activity that later light encourages is good for us.

To all of this I would add that some of us are larks, others are owls, and those in between are doves. But our morning or night preferences and other physiological programming can be offset or upset by the time society has selected through, for example, a time zone. Meanwhile, a “sun clock” that signals what time it should be further complicates time maneuvers. It does make a difference if the sun rises at 10:58 a.m. (Fairbanks) or 8:02 a.m. (Indianapolis) or 7:10 a.m. (Boston) during the shortest day of the year.

So yes, November is delicious when we get an extra hour. And March is torture because we lose it. However, the real question is about far more than choosing between Daylight Saving and Standard Time.

Actually, it all returns us to the Amtrak schedule. Time presents us with a slew of options. Whereas our watch says it is 5 a.m., we feel the real time on our circadian clock, a social clock, and a sun clock.

What to do?  As economists, we can only return to tradeoffs. Knowing that time matters immensely, there is no ideal answer…only an opportunity cost (a sacrificed alternative) for each time we choose.

My sources and more: For 2021, The Washington Post had an update on the switch back to Standard Time and also the story of a trip on the Crescent. Meanwhile, extending to a longer list of maladies, the newest research confirmed the impact of the time switch. Then, please note that this post is an update. It quotes some of what we said last March when sources included WSJ, and these papers, here and here.  And finally, our cartoon is from the Robert C. Byrd Center. Also please note that I am not 100% sure that the Crescent pulled into a station for an hour. Because of Covid, it is down to three days a week from its daily schedule.

From Bridges to Broadband: What $1.2 Trillion Will Buy