New dads would be guaranteed 12 weeks of paid parental leave if the American Families Plan is passed by the Congress.

The problem though is getting them to take it.

When we last looked at paternity leave, new dads in Denmark were our focus. The dad alone could get two weeks of leave and then he could split another eight months with his spouse. When one stayed home, the other went to work. However, social norms and money sent the men back to work. Because women typically do more of the child care and the housework, moms tended to take much more of those eight months than dads. Furthermore, since women were earning 17% less on average than men, unshared parental leaves made sense. The men earned more so they continued working.

Responding to a similar situation, in 1992, Norway passed legislation that encouraged new dads to take parental leave. Norway’s paternity benefit reserved four weeks only to the father. He could take it or lose it.

You can see below that leave take-up numbers soared. For new dads, participation rose from five percent to 50 percent: 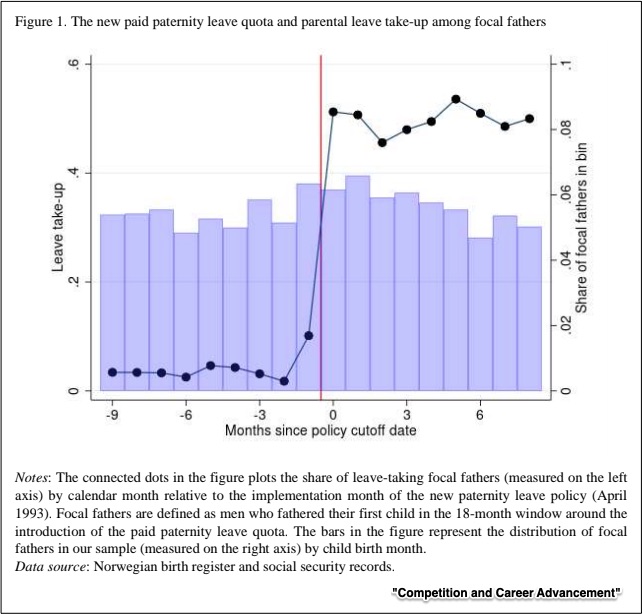 In a new paper, researchers took a close look at the impact of the 1992 law. Under the previous act, the workers that took leave suffered a career pay penalty. The authors of the study said one reason was the competition effect. When men are absent from a job, others step in to make sure everything gets done. At home with the baby, new dads miss out on assignments to high impact projects. Instead, a co-worker who is there will benefit. And that is precisely what could have happened…but only if very few workers took paternity leave and others did not. The overwhelming response to the 1992 law minimized the competition effect. When many were gone, then new dads’ earnings rose more than they would have normally.

The study suggests that paternity leave requires vast participation for it to be successful. Otherwise dads worry about the competition effect.

As economists, paternity leave returns us to tradeoffs and the elusive free lunch. Paternity leave reinforces family bonds. It helps working moms. On the home front it has many benefits. The sacrifice though could be your wage and status at the office. At work, the men who remain gain a competitive advantage. But not necessarily if the paternity leave participation rate is sufficiently high.

We are left asking if the American Families Plan is just a baby step toward a successful paternity leave initiative.

My sources and more: A NY Times column reminded me it was time to return to paternity leave problems. Yesterday’s article alerted me to this new study about Norway’s paternity leave. Then, as the next step, if you are curious about the impact on the firm, this NBER paper has some answers.

Where to Find New Capital Cities

When We Don't Need Traffic Lights